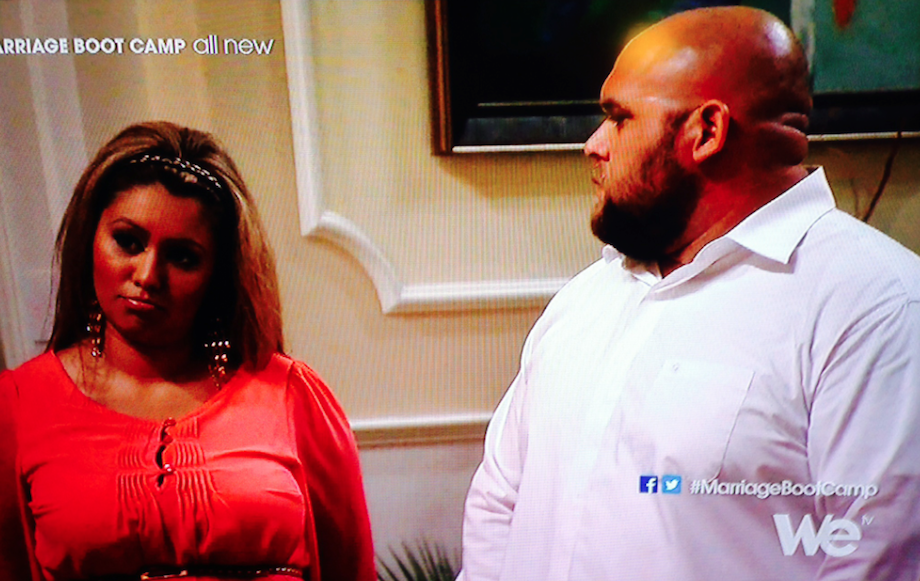 Lie detector don’t lie, but one of these two do.

It was only a matter of time before Marriage Boot Camp: Bridezillas went full-on Maury show. With this week’s episode’s reliance on lie detectors, we have officially reached that point (sans paternity-DNA testing, of course; some things are sacred).

But before we get to that, Blanca stares down the dual issues: How to make toast and how to accept that she may not be 100 percent perfect, as she thought she was before this here show told her that — gasp!!! — she’s not. For his part, Shaun says he’s had one of the “biggest turnaround” in the house as he and Sofia aren’t at one another’s throats 24/7.

The detectors are presented as the honestkey to moving on as healthy-ish couples; it affords them to ask any “burning questions” they damn want to ask their spouse. This shit’s hype, yo.

That horrible lady says she don’t feel like she has anything to worry about. Blah blah blah.

Ok, Julian and Blanca up first, yo.

Julian wants to know if she regrets the marriage, if she still likes banging him, if she’s ever cheated. (No, yes, no). They need some further probing — no pun intended — on the definition of faithful, though.

Blanca wants to know if he stays in the bathroom for hours to avoid her, if he’s ever cheated (yes, no). He copped to think about other women when pressed by the boot-camp sergeants.

She don’t like that whole taking 2-hour shits instead of talking to her though. Word.

Shaun and Sofia up next, neither of whom are comfortable since, you know, sometimes you don’t want to know the truth.

Shaun asks: Does she want him to give up bodybuilding (really, bro?), if she wanted to marry him (no, yes). Cops to being willing to leave if he don’t change though.

Sofia: Is the gym more important than me? Still love me? (no, yes). Has he been in touch with the ex (no)? Further probing: like, email and whatnot? (Still no.) She’s crying.

Jeff and Tasha up.

Tomas: Ever cheat or think of cheating (no, yes)? That brings nasty words that Tomas keeps inside.

Mai-Lee: Ever physically cheat? (no). Physically attracted to Sofia? (yes) Is Sofia hotter than me? (no) Would you be mad if I got a boob job? (yes) 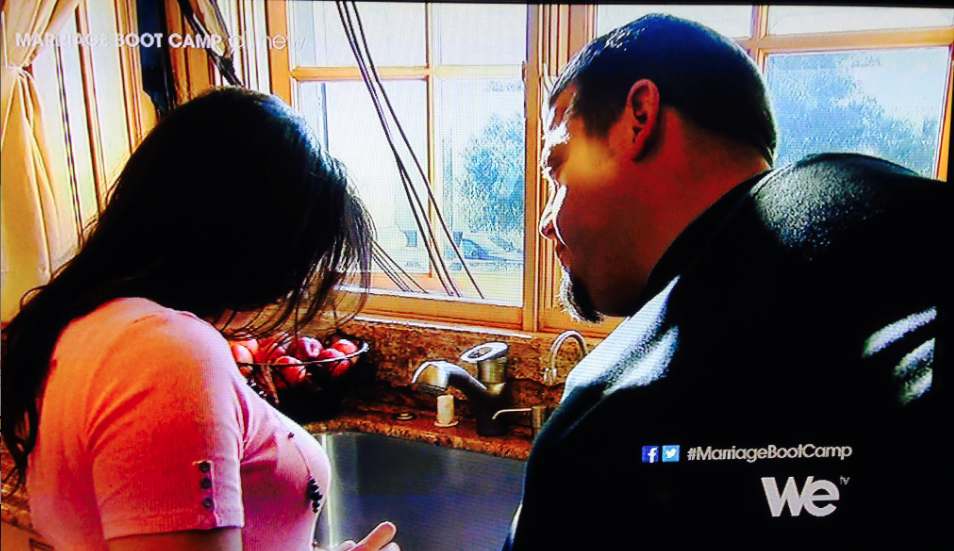 When they leave the room, lie detector guy tells the boot camp sergeants that Tomas lied about the Mai-Lee > Sofia thing was a lie. To which BCS Elizabeth notes “that’s going to blow up.” Oh, I think that’s an understatement, yo.

Horrible lady and her victim Mark are up. Don’t care. Once HL says her delays in answers are not calculation but wisdom, it becomes apparent that she has not learned a goddamn thing and continues to be the High Priestess of Self Importance.

And now, they turn on the broiler and see whether the froggies will jump out of the boiling water. WILL THEY MAKE UP OR BREAK UP?!

Horrible person’s husband lied about deleting texts (from his mom). Horrible person thinks about cheating on her victim (that whole pause jawn).

Shaun and Sofia both lied! She DOES want him to stop lifting (she explains that she wants to spend more time with him). Shaun HAS had contact with the cray ex.

Julian’s clean. Blanca’s cheated on Julian! Oh my oh my oh my. Sex outside the marriage, lie-detector machine spiked. Now, she say she don’t lie or cheat. Twill be interesting to see how this play out, yo.

“This bitch made me look for a fool for the last time,” he’s saying. She’s pulling a pre-marriage cheat out on Julian too. Leave me alone, he’s screaming. You ain’t worth it. Get the fuck outta here. Then, he reverts to this: If you’re not lying, the show is and we’re leaving today. Julian, she says, is an asshole. OH AN SHE ALL SCREAMY.

All the couples in damage-control mode now, but they fixate on Julian and Blanca, who then drill deeper to a throwaway comment that the “cheating” wasn’t physical. MCB Sgt. Jim doesn’t like the sanctity of MCB being challenged by Julian, politely. They opt to stay.

From there, MCB takes people’s rings back (Tasha, in a moment of honesty, gets all OMG don’t take my ring. It’s miiiiine). They have to give them to that hot sergeantess, too. That won’t help with the jealous folks (ladies) tho. 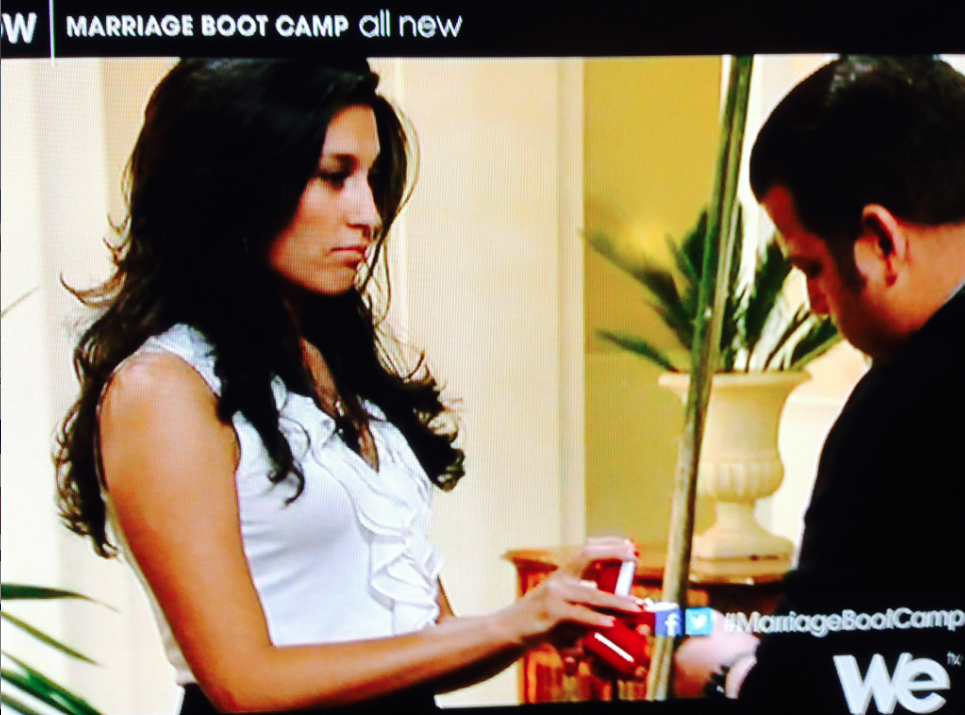 Then, they set them out onto the town for “Hall Pass” night. Upon their return, the ladies’ll stay in the same room as will the fellas.

The fellas start with shots (#doshot). Julian slugging em back yo. At a place called the “Man Cave,” which is one rung about “Man Hole.” Oh, Shaun starts drinking and dancing topless at the Man Cave. Because of course he does.

The ladies #doshot as well. 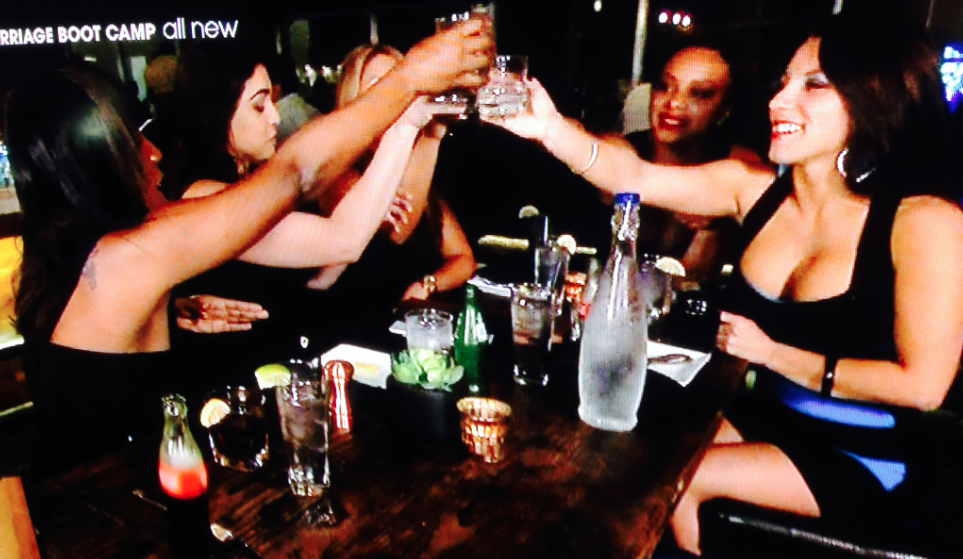 Julian is mackin’. Shots from cleavages! 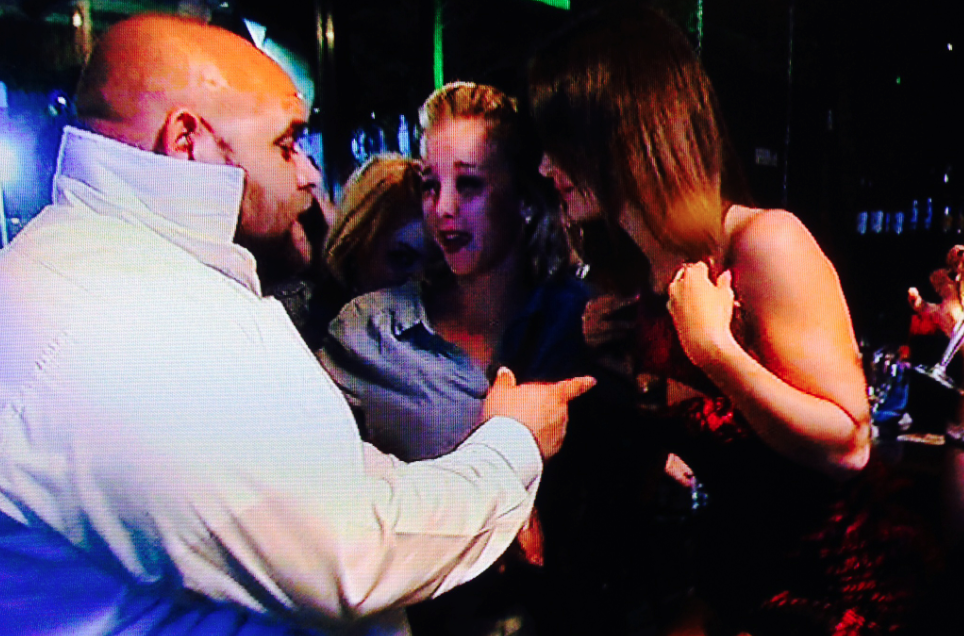 The ladies get yelled at because they’re being loud to the point of deserve getting yelled at for carrying on. But whatevs. Pot, kettle.

Anyway, in an entirely unexpected outcome, the booze gets the chicks angry (particularly paranoid Mai-Lee who thinks the worse even though Tomas is on his best behavior; the others take the eminently mature approach of TPing the guys’ room) and the booze gets the fellas (a few of them) randy and angry, too.

Shit gets thrown, of course, when they’re all back together. Ah, dag, the DVR cut off a few minutes early. Oh well.