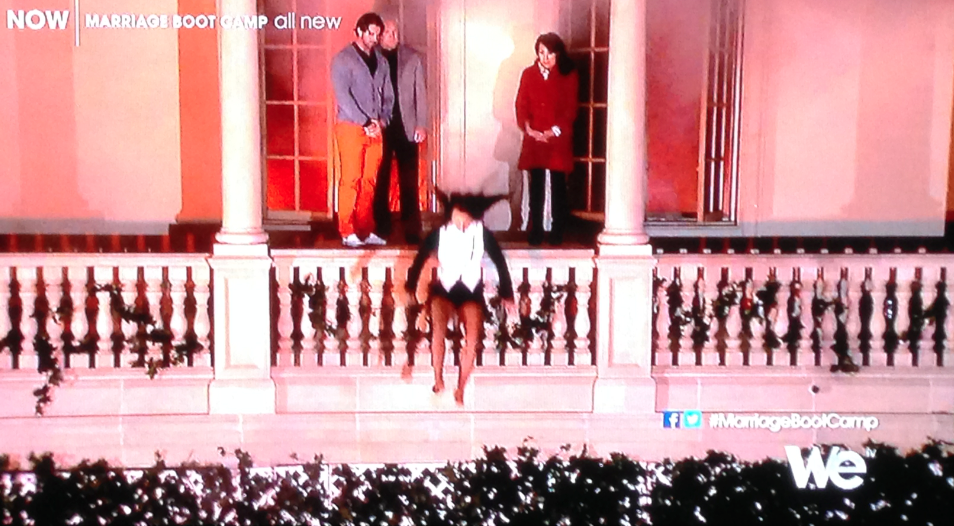 It’s the morning after the night when sassy puppet shows led to fornication throughout the Marriage Boot Camp: Bridezillas Mansion. Or did they?

Seem to be some intimations that Sofia didn’t get none. (I turned the show off early on account of puppet disgust, so this might not be news to anybody who watched the whole episode).

Out at the pool, that horrible lady is hearkening back to her man shoving some actor dude into the pool for touching or washing her feet or whatever. She just keeps digging and digging and digging. About what, who cares. Insufferable.

Boot Camp Sergeants (BCS) are playacting again. Making the Campeteers face their inner demons. Specifically, who they need most to forgive.

Horrible lady remains unwatchable, even if she pulls the never-knew-my-dad card. (A religious fixation — and words that purportedly point to a breakthrough — don’t mask a corroded, bitter, self-important soul.)

Those mentioned: Fathers (Mark, Tomas). An ex-girlfriend (Shaun/Sofia, with hot sarge in the role of “ex” initially). Julian gets a negashout-out (for pre-marriage infidelity)! An ex-wife (squeak-talker Jeff, brought to tears).

Then, Mai-Lee’s up and what she says is “I don’t know how to forgive someone at all. I don’t think I’ve forgiven anyone, anywhere, anytime in my life.” Tomas is “not surprised,” as she throws six-year-old beefs at him inexplicably. BCS Bro slides into ex-boyfriend role, though.

M-L remains unforgiving. Ice, yo. And that’s why she and Tomas have to stick around after class for “not normal” behavior. Her mission: Forgive erthing he’s done in the past six years (“stupid stuff,” says Tomas), but she ain’t be thinking that’ll happen so everybody else best not be expecting it to. 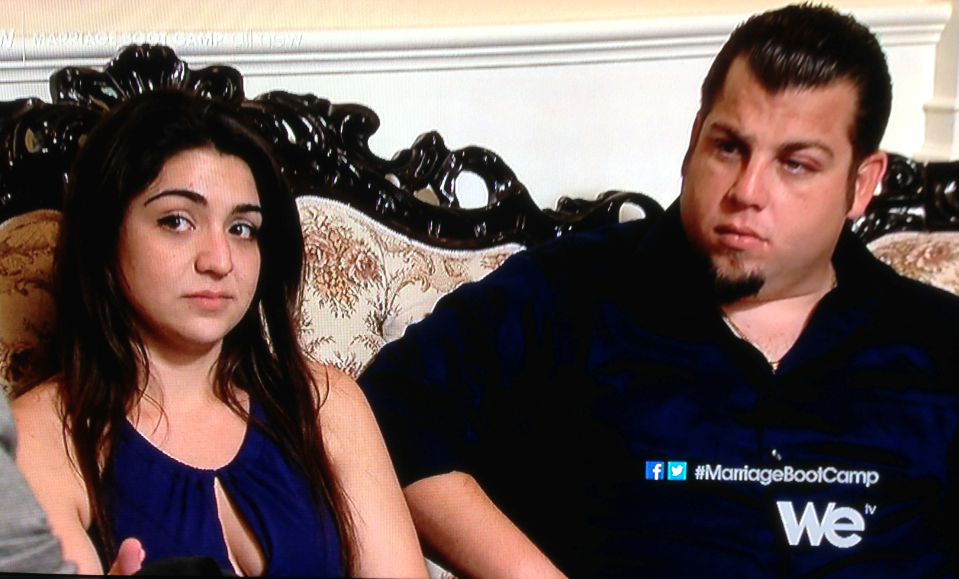 The respective couples are off on their own discussing matters for which they need to grant (or seek) forgiveness. This is when Shaun admits that the ex “made me hate women.” It’s such an awkward thing to say. Deep-seated issues.

But before much thought can be put into it, we’re off to Difficult Task Of The Night!!! preparation.

TWO PARTNERS ENTER THE BURN ZONE, ONLY ONE CAN LEAVE!

ULTIMATE SACRIFICE FOR LOVE WHEN YOUR HOME IS ENGULFED IN FLAMES!

THIS IS WHY THEY CALLED THE EPISODE “LEAP OR DIE FRYING”!!!!!

But not before they can kinda, you know, chat it out because it’s not like real fires are fast moving or anything. Dear God. This is as contrived as that whole death-bed gimmick from Episode II.

Here is a list of the “dead” vs. the “survivors” (as bo-hunk “firefighters” look on from the inflated jump cushion) …

AW CHIVALRY IS ALIVE! FIVE GENTLEMEN DIED SO THEIR LADYFOLK COULD LIVE!!!!

Listen, I don’t know what it’s like to be on a reality show, let alone a reality show after a realty show in which I was involved in a berzerker wedding that led to the need for public-airing of nuptial grievances. But these folks must be some dense mopes if they’re not acting when they buy into the gimmickry’s life-or-death-edness.

Entirely underwhelming episode. Here’s hoping they ramp back up to crazytown for the remaining two pre-reunion hours, yo.

← Hit-and-Run America, Vol. DXVII
Here Are Screenshots Of My Ever-So-Brief Appearances In ‘We Could Be King’ →