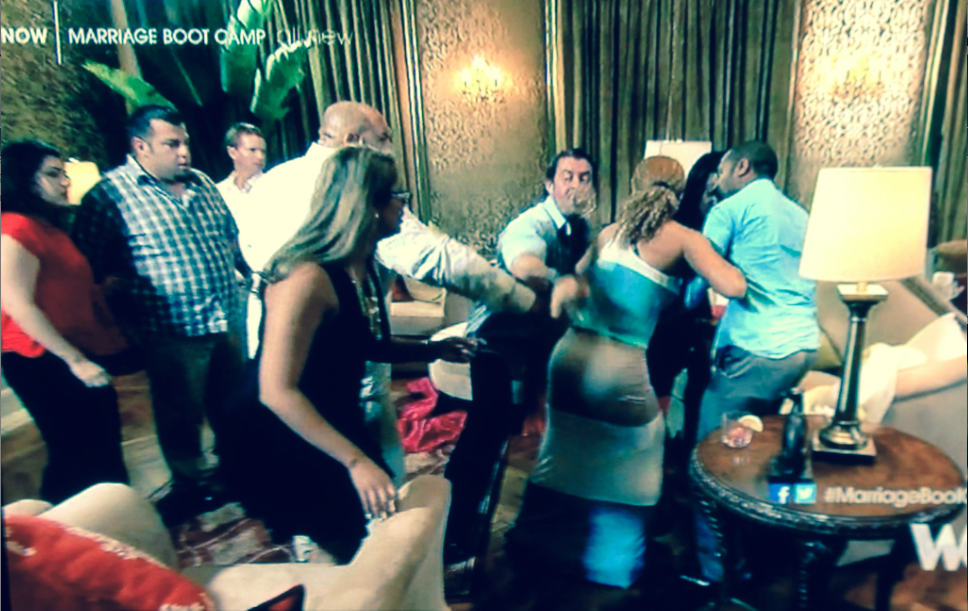 If Rockwell’d been into low-rent reality shows…

Somehow, I ended up trading Tweets with Shaun and Sofia, and Blanca, and Mai-Lee this afternoon. They all seemed a’ight. I reckon I stop calling Shaun the “Meatbag” or whatever. Just the right thing to do.

So anyway, they seemed to think this episode was gonna be like tee ball, but instead of the ball, there’s an easy boomroast just there for the takin’.

Let’s see. One of them’s making breakfast in bed for “brownie points” and getting torn down for crunchy bacon. Gloria and Mark. It’s them. They’re unbearable. Insufferable, really.

Blindfolds off. They’re in court. Blood flows red on the highway; could bootcampeteers spirits get broken in fauxish court?!?

Heh. They got lawyers that they’re diming to. Sofia gets asked about steroids and violence and fears. Oh my.

They got a poll at the bottom of the screen. WHO WILL “WIN” THIS DIVORCE?

Shaun’s barrister’s asking about Facebook messages and money. This is what Sofia looked like when she admitted to squirreling money aside for “breast augmentation.” 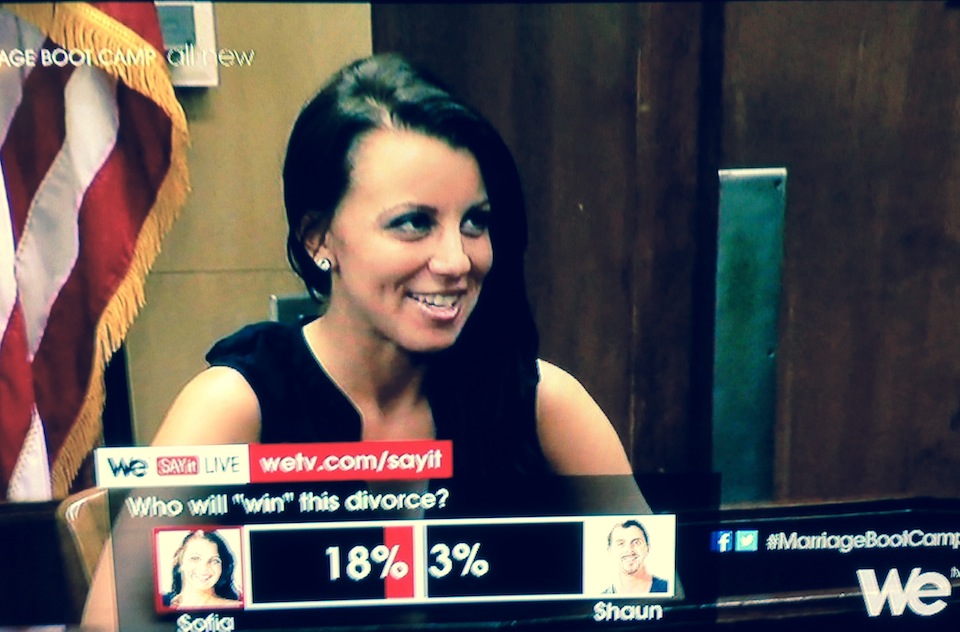 Shaun’s getting grilled about being a bully. And some sippin’ issues. Not violent, though. Nope.

“Everyone knows Shaun has an anger-management problem. They’ve all seen it. Sorry,” says Sofia.

Mark’s a liar. Gloria hits the kids? No. She whips ’em.

Mai-Lee spends money they ain’t got.

Julian hit a wall. “Maybe sometimes I get over-beveraged,” he says. Boss. 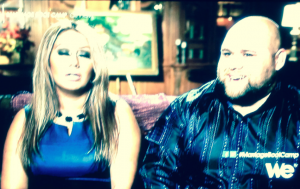 Blanca be lyin’ about botoxing. Whatever. That’s what we do in L.A.

Judge says “Blanca’s filled with contempt for the court as well as contempt for you.” Boot Camp Sergeants pile on with talk about a Blanca Bubble in which denial is a lifeforce. There’s like a Maury-backstage moment.

Tasha I think her name is says how these stories make theirs look good.

Shaun’s boozin’ again. It’s of discussion amongst the campeteers. Mai-Lee’s gettin all lectury. Gloria shouts her down. Even though it had nothing to do with Gloria. Enough of this already.

Were spirits broken? Naw. Erbody’s always so angry when they stick em in a room together, though; at least what the show’s showing of ’em all being stuck in rooms together sans chaperone.

Aw, man. FiOS froze. Rebooting. Will see how many minutes I lost.

If it’s anything important, someone fill me in pls.

Ok, back: Mai-Lee and Gloria (snappin’ her fingers at each syllable-ish to earn respect I guess?) becomes Tomas callin’ Gloria a bitch and whatever Gloria’s man’s name is saying step off my wife ain’t no bitch yo. 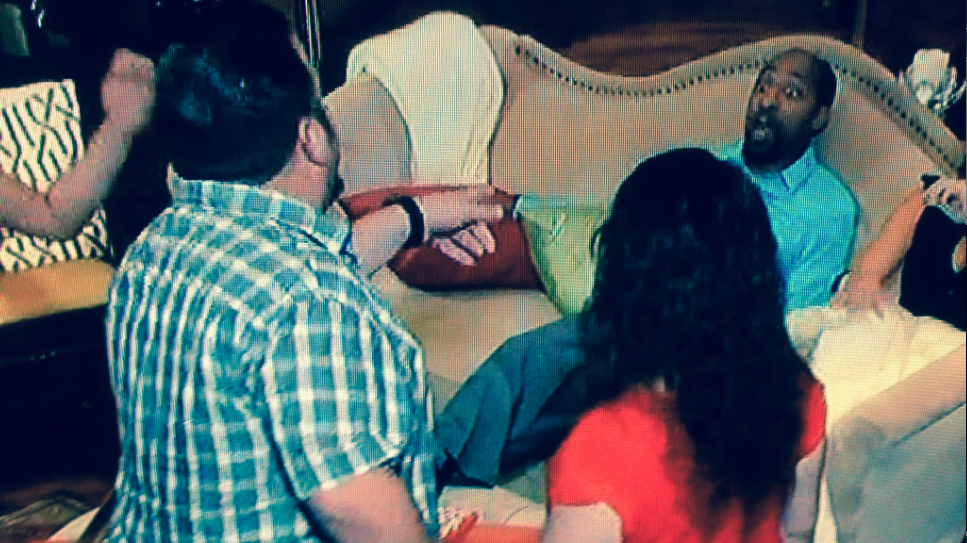 Dude’s then all krazy eye killa preentryin’. Tomas “will rip your head off. On TV.”

Mr. Gloria ends up hitting Sofia unintentionally or at least knocking he down. And while they don’t show it, he likely pisses his big-boy pants when Shaun takes this as a personal affront (plot-shift moment!). Then Shaun flips furniture and rips his shirt off.

They’re all, in their private interviews, making fun of the shirt tear.

Sofia’s playing Swiss. She’s frustrated; genuinely, it seems. They end up fightin’ in the hall.

Tasha and Jeff get camera time. Saner by default. But not really. There’s some time left in this season.

Next day, Shaun’s swearin’ off the bottle. We’ll see. Poll at the bottom says viewers don’t think he will. Benefit of the doubt from me, though. Philly thing.

Oh for fuck’s sake, this kinda pisses me off. Life-and-deathbed shouldn’t be no damn reality-show prop. Borderline affront to decency. Is it really getting you any extra viewers, network and hosts?

Luckily, this is when the FiOS outage took some show away! Praise Jesus.

We got Tasha and Jeff on there now. She’s taking his inability to express himself in this scenario as important as human survival. It’s like Ghost, but without pottery or attractive people supernaturally-dryhumping to the Righteous Brothers.

Now, Shaun and Sofia are up. Drinkin’ and fightin’ and drivin’ and pinnin’ em both under a crushed car. Brain dead, apparently.

Shaun’s all can I switch places. Should be me in that bed. Adddrrrrriiiaaannnn! I was a scumbag bastard and you saved my life. I’ll miss ya!!! BEEEEEEEEEEEEEEEEEEEEEEEEEEEEEEEEEEEEEEEEEEEP. Dead. Gone. OH NO SHE ISN’T! SHE’S ALIVE. OH PRAISE JESUS THEY DIDN’T REALLY CRASH LAST NIGHT AND SHE WAS IN THAT BED ACTING LIKE SHE WAS A BUTTON-PUSH AWAY FROM A HOMEGOING CEREMONY!

Scene was subtitles away from telenovela.

End-of-show couple evaluations. Too pissed about the whole fatal-crash gimmick to pay attention.