This here episode of Marriage Boot Camp Bridezillas is titled “Spouse Swap,” but it’s not as swinger-eyes-wide-shut randy as one might think.

I mean, sure, they couch it as “spending the night with someone else’s spouse” and “have you ever wondered if the grass might be greener on the other side of the fence,” but it’s little more than a room share followed up by tasks that expose the Marriage Boot Campeteers to flaws in their relational makeup. Faced by their personal negative trait. What traits do they have that your spouse don’t, for better and for worse and all.

From the get-go, Mai-Lee is off-the-hook cray, the kind of cray that speaks to an inability to ever fully trust again because of being wronged in some fashion in the past.

Anyway, here are the matchups:

☻ Shaun and Horrible Person Gloria, who instantly glides into cunty mode by saying her game mate is “a man” while Mark “reminds me of little schoolgirl, kinda”

☻ Sofia and Tomas, and Mai-Lee instantly exposes her fangs because her man got paired with the house hottie

Mai-Lee, not seven minutes into the episode, is talking about dead-body disposal and how she’s “ready to pack up my bag and leave.” Tomas notes that she really has no reason to be jealous — ever — and it makes him wonder why he’s even still around.

Horrible Person Gloria is already trying to impose rules on Shaun, who has become a prop for her to tell her cuck that maybe he can give her what she needs because he sure as hell hasn’t.

Blanca falls asleep as Jeff or whatever talks about his ideal mate traits.

Camping trip as new couples time! Do tasks for the overall team!

Blanca and Jeff go food shopping (and he loads up on the hot dogs).

Shaun and Horrible Person are sent off to procure camping supplies (and forget to pick up some sleeping bags).

Tasha and Julian put the tents together.

Mai Lee and Mark gather wood and build fires (and do so rather effectively — for a spell).

Sofia and Tomas are in charge of cooking. 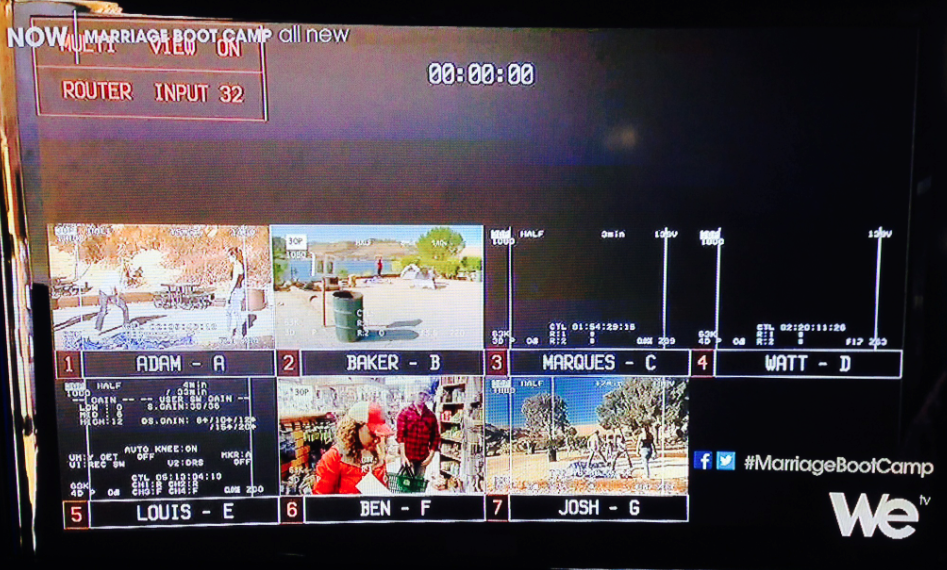 Oh snap, when Mai-Lee asks whether Tomas might could get jealous, he notes that there’s really nothing much to envy about men reminiscent of 12-year-old girls.

On the van ride to the site, Julian explains snakebite medical-attention delivery services; namely, that if you get bitten by a poisonous snake, “quick, suck the venom out.”

To which Sofia retorts, justifiably, “Mai-Lee will never let Tomas (pronounced Thomas) suck venom out of anything of mine. She’s gonna be like, ‘Die, bitch.'” Here’s what that looked like: 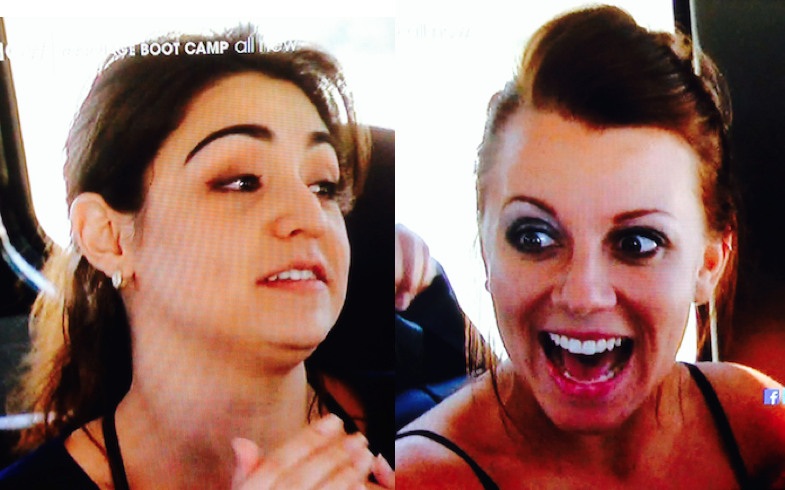 “I think Sofia should be worried,” notes Tomas, with prescience.

They get to the camp. Hot Boot Camp Sergeantress Ilsa is there. See? 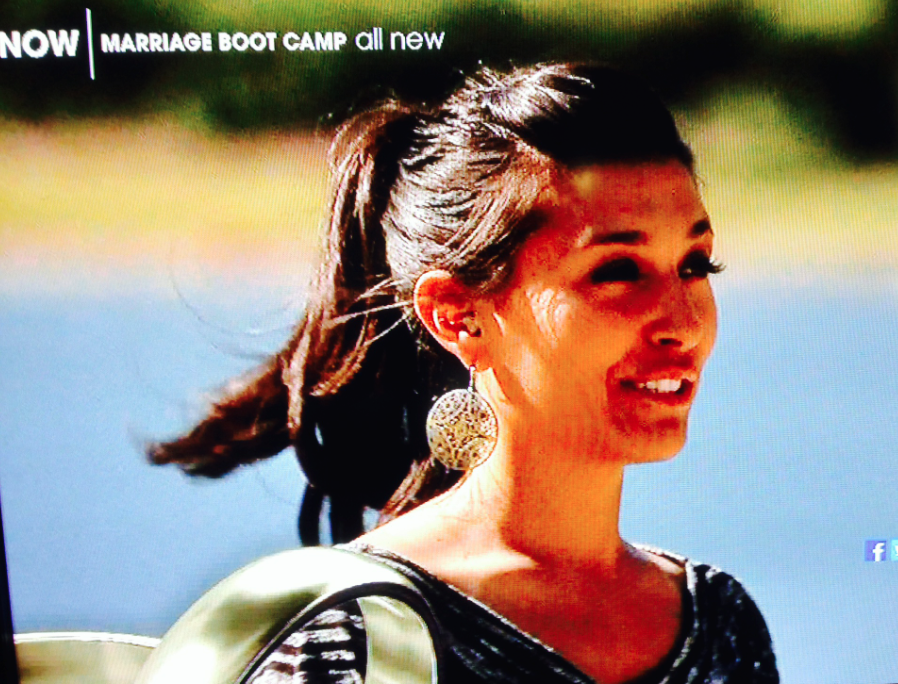 Task-completion attempts start as the Head Sergeants note that the aim is for Campeteers to see their own annoying trait in their camping fauxse.

Horrible, Horrible, Horrible Person Gloria chides Shaun for cussing in her presence because “she’s a lady,” which may be true in the physiological sense, but it doesn’t manifest itself through vicious personality traits.

“I’m not going to eat a hot dog,” says Princess Blanca at the market with Jeff. “I don’t like hot dogs.”

This sentiment could make her the most horrible person on the show. I kid, I kid. Nobody is as horrible as Gloria. Not on reality-show TV. Not within the prison-industrial complex. Poor Shaun, having to go buy camping supplies with her.

Then, Tomas and Sofia are skipping stones on the lake. And, yooooooooooo, Mai-Lee don’t be liking this because Tomas never took HER out the lake to skip rocks. WTF, yo?!

To their credit, the Boot Camp Sergeants done set up a good reflection-on-weaknesses chore here.

To her credit, Blanca knew to snag a little wine with their grocery monies (“Because you need alcohol to be around Jeff”). Or, as Fox News would call it, committing food-stamp fraud. And welfare queenery making the WHITE MAN carry all the bags to the car. 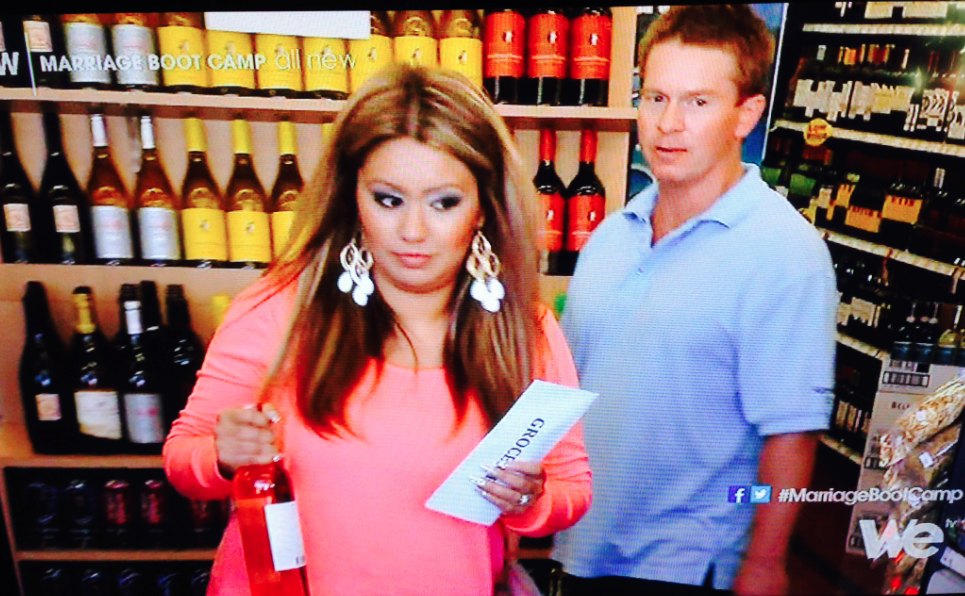 Lakeside-battle flare-up sends Tomas stomping off and Sofia in pursuit as Mai-Lee sits there complaining to Mark. Poor dude.

Sofia kinda counsels Tomas after this. Here’s what Mai-Lee thinks Tomas’ mind was on after watching this picnic-table session from afar: 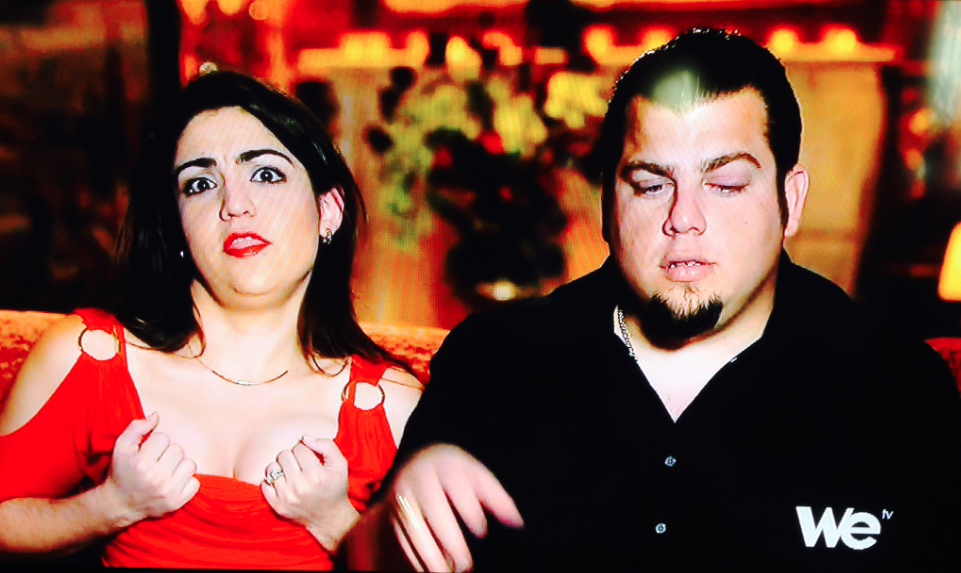 Boobs. She meant that Tomas was thinking about Sofia’s amply-enhanced bosom. And who knows; maybe he was.

Mai-Lee is still going at Tomas’ throat because of perceived flirtation with Sofia. He stomps off after removing his mic kit. And blows up. Just like the lady Sergeant says he does. Of course, this is reason enough for Horrible Person Gloria to yell things at Mai-Lee from afar. Because why not be a judgmental, husband- and “foe”-belittling prickess at every turn. Please, WeTV, never again with this lady.

“I don’t care no more. I want to go home,” says Tomas, who doesn’t go home, of course, but he and jellybride are warned that if they act like they been acting that day, they will be asked to leave the set for good.

This, mind you, was abbreviated in commercials and teases to make it seem as if someone had been voted off the proverbial island or out of the Big Brother house or whatever competitive reality-show eviction analogy comes to mind. Oh noes.

Anyway, next week’s episode involves stripping down and exposing skin. Also, there’s puppets involved in sex talk and Jeff is noting that a “pickle” likes “to be sucked.”

← Hit-and-Run America, Vol. DXIII
Don’t Be Shocked If You See Eddie Izzard Aimlessly Wandering Around An Old City Parking Lot In May →