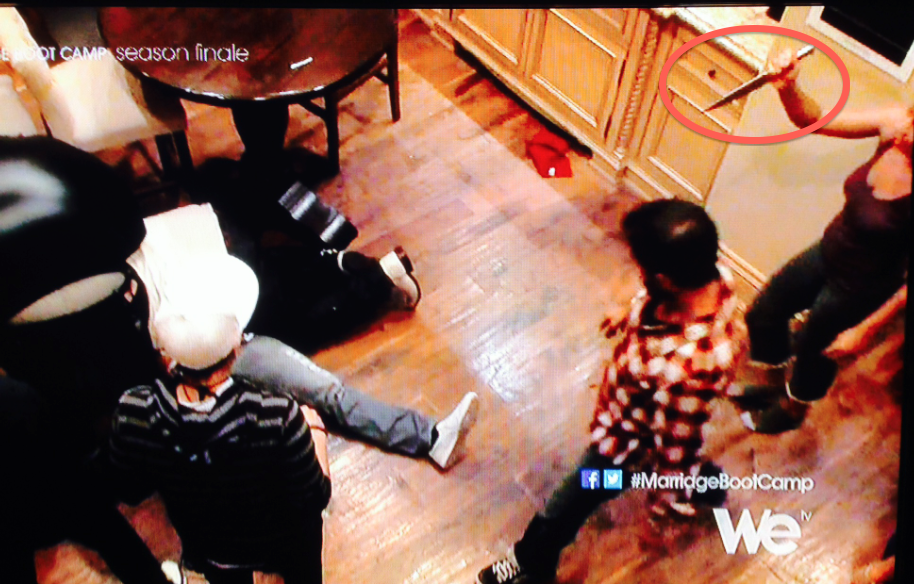 That horrible lady has a knife.

Well now it all makes sense. Two years of watching this — I don’t know — morally-depraved Marriage Boot Camp show. Guess it was obligatory since I watched all them episodes of Bridezillas.

But tonight, no, tonight brought clarity.

It’s been building, all along, to an epilogue for the Tuesday Night Fights series on Deadspin. Gary from lower-Northeast Philly losing to his wife’s car was not a -30- at all.

This few minutes from the season finale is.

Ten people on the show; the big guy is Shaun from Philly. Julian, table-flipper, is from Cali I think.

It’s not everyday that you see a TV show lube its contestants up with booze and throw them into a boiling pot of everclear. But today is not everyday.

There’s more, like Sofia — already from Philly — getting her leg busted up. Due to Shaun. But I just can’t. Nothing really to say. Enough. I don’t want to be as exploitative as whomever decided this was a good idea.

Hope things work out for Tomas and Mai-Lee (one and two). Whatever with the rest. 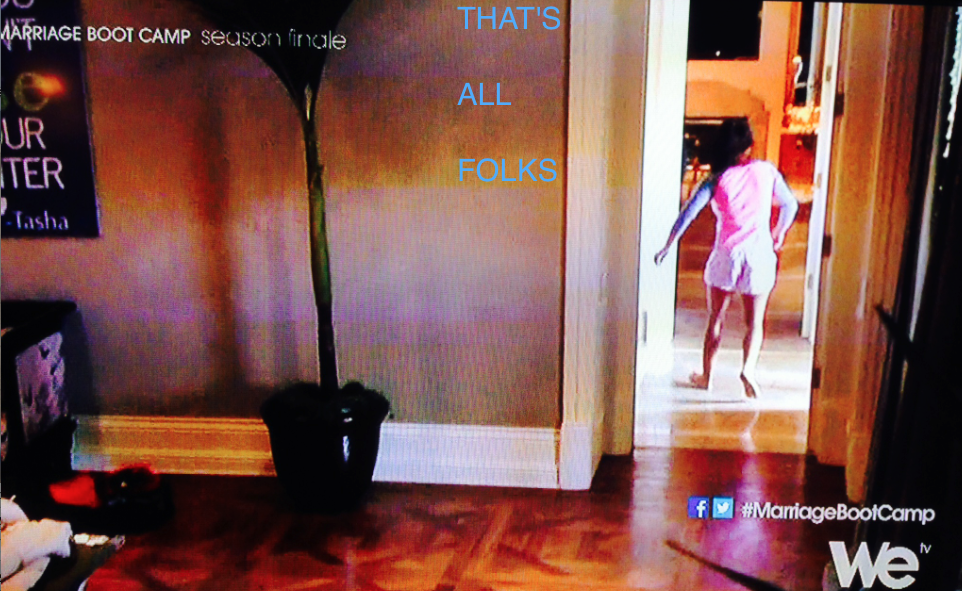 Oh, who am I kidding? I had to watch it to the end.

There’s a little ceremony at the end — featuring hot marriage-boot-camp sergeantess holding the door open for the lady contestants — in which the couples are afforded the opportunity to re-exchange rings that were taken away from them before WeTV sent them out on the town to get hammered and return home all brawly.

Julian and Blanca stay together. Of course they do. Peas, pod.

As do Mai-Lee and Tomas. Good stuff.

In a shocker, Tasha and Jeff turned it around and became more likeable than freakishly odd. They’re together.

So too are Shaun and Sofia of The Busted Leg, but only after Shaun agrees to, after seeing no ring at first, lay off the booze. This is wise for Sofia, WeTV and Philadelphia at large.

Oh, that horrible woman Gloria decided not to give Mark a ring. Because that’s what self-centered witches whose lifeblood is belittling others are apt to do on cable television shows. If they’re still apart, Mark is the luckiest contestant to have ever appeared on Marriage Boot Camp: Bridezillas. What a horrible, horrible person he married.