Alright, so they lead into tonight’s episode by showing all them Marriage Boot Camp contestants running through a backyard maze, but it seems like trash bags lining the walls instead of ivy or stone. Even corn. That’s a preview scene. Maybe some of ’em’ll freeze like Nicholson in The Shining.

They show the highlights of closet fighting. And matching pastels.

Wait, it seems as if Mai-Lee is bitching at Tomas for not helping her clean her shirt or some shit. C’mon.

And Sofia’s bitching at Shaun for his beard or some shit. Drowning comes up. C’mon.

So they’re at the maze. They’re, like, going to race through it with the other half on a CB. A discussion of rights and lefts (particularly the hand signals thereof, like DeSean maybe) ensues.

Angry closet fighters up first. Something ensues I guess.

Shaun gets lost because of course he does. But he and Sofia, but probably mostly the latter, figure it out good (foreshadowing: they’ll end up getting into a scrap about recovery speed).

Tasha and Jeff just skeeve. And then they show a preview of her wilding. If it was to happen — that Nicholson thing — it’d be Jeff. Except, in the role of Danny running into the maze, it’s Tasha.

Well anyway, sergeants are all on the balcony looking down like a catty Caesar. All judging and parallel-drawin’. (Justifiably so in most cases.)

bLanca and Julian have to go still. That goes as you’d expect it to go.

Oh, the whole jawn was a contest for a gourmet dinner or some shit. Shaun and Sofia were the fastest. He wants steaks. She declines the award cause she figured it all out, that gimmick Sofia did. Mai-Lee: You do pretty “well” not pretty “good.” Sorry. Pet peeve.

Julian is chivalrous? They won. And they get to pick a couple to serve them. Tasha and Jeff.

Mai-Lee’s explaining why she’s pissed and Tomas is making faces because something got in his eye he says. Hope he got it out.

Anyway, she does get pissed way too easily. Just keeps pushin and pushin.

Commerical break. THIS comes on: 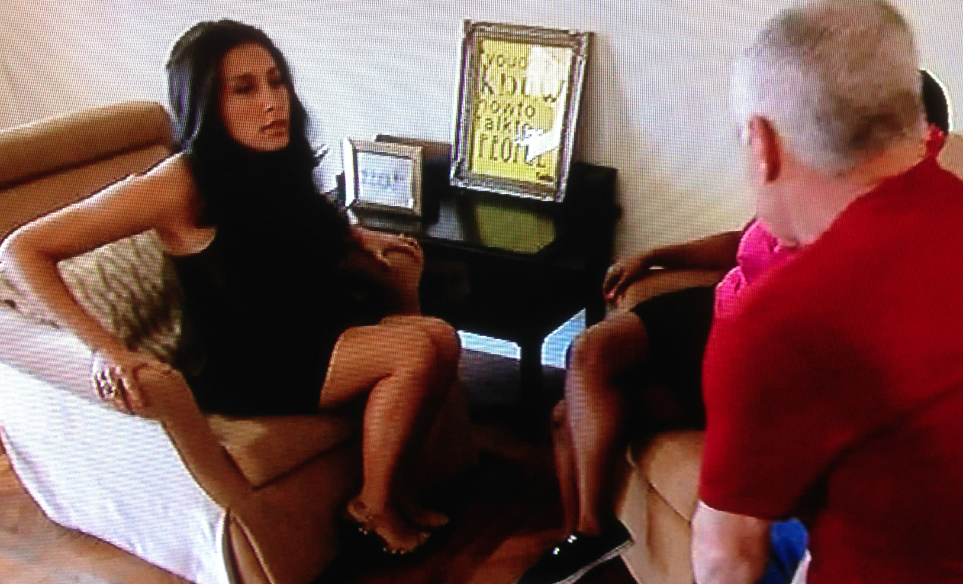 Blanca gets all ‘Jeeves and Mammy, wait on me,’ on Jeff and Tasha, who calls her a “heifer,” I think.

Now they’re onto cosplaying one another. Like, refleprojecting their interpretation of the other’s mind back onto them.

All ripples of perception.

How do you know you see blue the way the person next to you does? Do you ever really? Even if they say you do, and that makes you believe you do, but belief isn’t definitive?

This is turning into some spiteful Big Brother-type gimmickry insofar has geeking up tensions that already sit on edge. Even if it works in a sergeantorialy intended fashion.

Horrible person Gloria is bitching at Shaun and Sofia yapping during that little scene-amid-commercials thing they do in the middle of the commercials with about 15 minutes left in the show. Yawn.

Tasha and Jeff are just some weird file-it-away-for-that-day-one-of-em-finally-snaps tidbit ’cause that shit’s happening like sea levels are rising.

Tears and shoves ensue. Hers (both). And then hugs. Aw!

BREAK DOWN: IT WAS ALL ABOUT COMMUNICATION TONIGHT WAS!

Judgment ensues. Gloria reaches, if only slightly, for the racism card but doesn’t pull it from the deck. A bunch of things viewers probably already know from the other couples. Blanca has aged from 2 to 8 in her emotional maturity level assigned to life years. And that’s about it.

← Here Is A Picture Of What Appears To Be A Bottle Of MD 20/20 On ‘Parks And Recreation’
Hit-and-Run America, Vol. DXI →