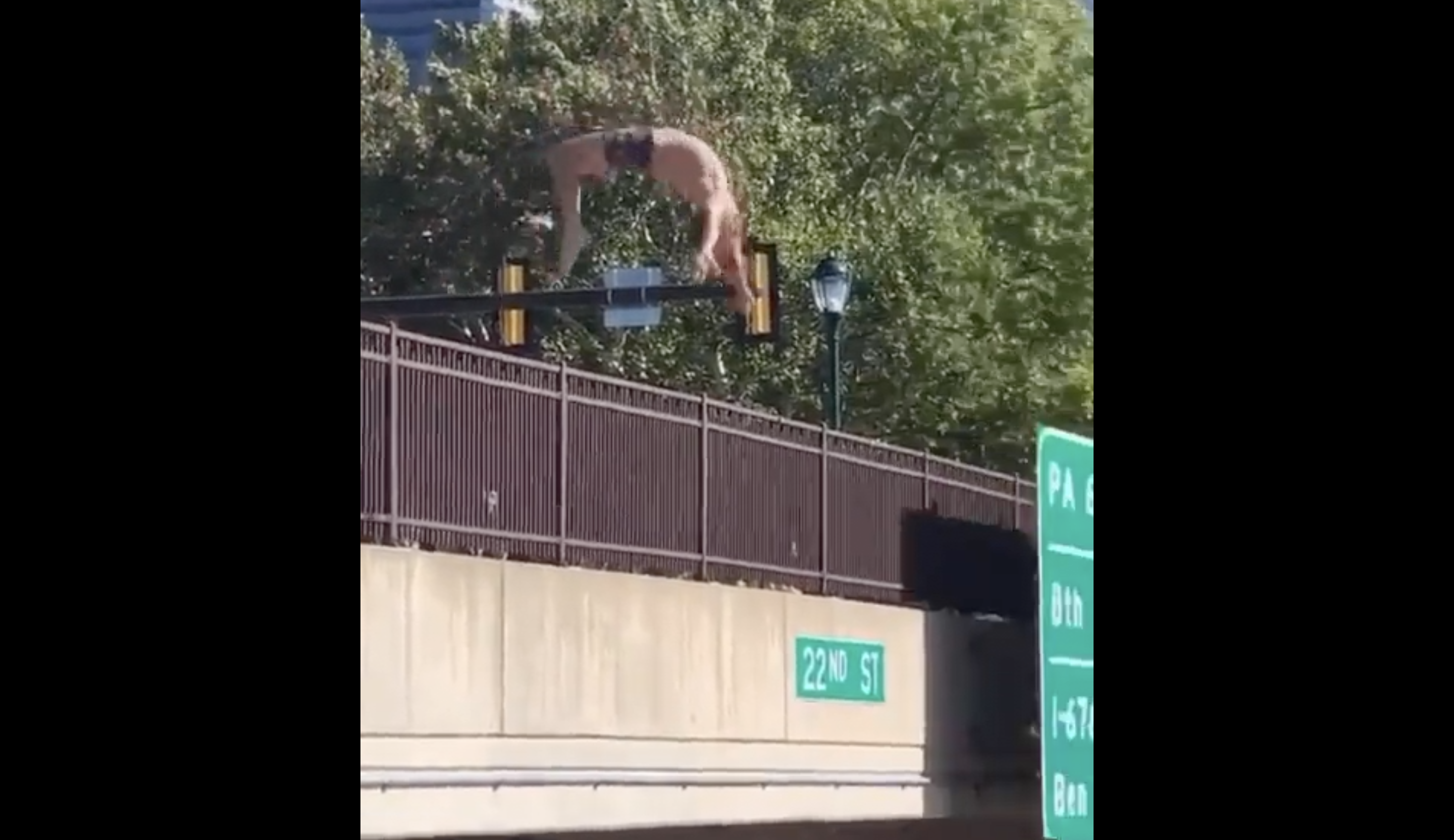 Despite all the chaos of the City of Philadelphia being ostensibly underwater this week courtesy of Hurricane Ida’s remnants, one moment stood out as a shining beacon of hope amid turbulent times.

I am talking, of course, about the dude who dove off the 22nd Street Bridge into the Vine Street Expressway Canal on Thursday afternoon.

To the haters, he was inviting disease and plague into our lives.

To the real ones, he’s a legend whose story will be passed down for generations.

His name his Justyn. He’s an architect with Frankford roots. (And yeah, he’s the Dumpster Pool Guy.) He’s also an avid jumper who chronicles such pursuits via his Instagram account, @BombSquad215.

What follows is a transcription of a Friday conversation, which was facilitated by a very kind Twitter friend. (Thanks!!!) He has turned down media requests, a circumstance brought about by not wanting to get slammed for the actions he decided to take.

That’s ok, though, because I love talking to Philadelphians who go above and beyond to add to the 215’s lore.

What led up to this monumental moment in Philadelphia history?

I wasn’t here for the Pope (who visited Philadelphia in 2015) because I was in Japan at the time. I was jealous that everybody was able to be on 676 (when it was closed to vehicular traffic). I saw this as an opportunity to jump off the bridge, finally. I’m really into cliff jumping. My Instagram account is all cliff jumping and bonfires.

So, I left work in the middle of the day, did the jump, went home, showered and went back to work. I was coming from near Sugarhouse and drove down. I had to muscle through traffic at Eakins Oval and backed down 22nd Street because it was closed off.

I posted up for about 30 minutes to assess the situation.

I’d already cross-referenced Google Maps to check the depth. It was 10 feet.

One thing I wanted to make sure to do was touch the bottom on purpose. Then, I sprung up and got out as fast as I could because I didn’t want to be in s*** water for too long.

What were you thinking as you mounted the rail for your dive?

And when you were in the air?

I was thinking about sticking the landing and then going about my day. I definitely thought about the water quality. But, it didn’t smell that bad. It was like mineral-salty creek water after a flood. Could there have been s*** and piss in there? There might have been. But, you know, I went to that Phish show in Atlantic City a couple weeks ago. People were pissing the water all over the place there. That water was probably worse than what I jumped into.

I also made sure that I didn’t have any open wounds, because that could’ve presented problems.

I knew I didn’t want to be in it that long. Dive. Land it. Out as soon as possible.

How did you clean off?

I drove back to Brewerytown, took about a 20-minute hot shower. Scrubbed really good. Used everything to clean off. Used hydrogen peroxide. That sort of thing.

Are you feeling sick?

Not at all. I’m good. Well, nothing related to the jump. When people have asked me about it, I’ve been saying, ‘Well, I’m shitting non-stop and I keep throwing up. Things aren’t going well here.’ Then, I wait a few seconds and say, ‘I’m fine.’ I would be doing all that stuff if you believed all the haters’ comments, but that’s not the case.

So, what’s your parting message for the haters, and the world itself?

Life is too short. Time keeps moving faster. I try to seize the moment every day. I’ll have carpe diem on my tombstone.

I just hope I don’t get arrested for bridge jumping or trespassing like people who jump off the Ben Franklin Bridge do. This is the first and only interview I’m doing. I’m not about to get on TV.

Thanks so much and stay safe, Justyn!

3 comments for “Exclusive: The Guy Who Dove Into the Vine Street Expressway Canal Tells His Legendary Tale”