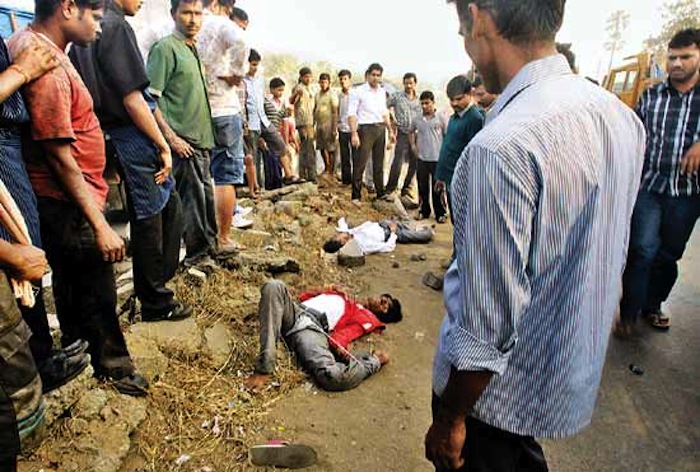 Author Extraordinaire Felix Clay shared with the world a riveting glimpse into the world of hit-and-runs.

Namely, he wrote a gut-busting article on a website called “Cracked” about all the funny reasons that people flee the scene of collisions that leave people dead (or close to it) on the roadways.

Check out this poetic lead:

Don’t you hate getting run over? What a pain in the you-know-what, am I right?

Oh God yes, Felix, I DID hate getting run over. You. Are. Sooooo. Right. It was a pain in the I-know-what! LOL

And the worst part of nearly being vehicularly homicided is when the other driver can’t take the time to not speed off like the Road Runner just after the Acme delivery guy showed up.

So, there you are, bent in half, ass in the air trickling blood down your spine and onto your face as you lie peacefully in the gutter listening to your bone fragments grating against each other in a kind of semi-pleasant but very uncomfortable rhythm, and thinking, “Man, that was inconsiderate.” And all you can do in that situation is wonder what that other person was doing that was so pressing and so important that they couldn’t even pull over for a second to help you get your shoe out of your intestine.

The laughs just keep coming in.

Even though I was laying on the ground in a puddle of blood, my brain expanding to the point that they had to cut pieces of my skull out to make sure I lived, I get what he’s saying here!

Listen, I’m all for gallows humor. What I’m not for is gallows fan-fic about what it’s like to get run over by a car.

Yes, people use shitty excuses when they get caught for fleeing the scene.

No, it’s not necessary to write some half-assed snark about what happens in the aftermath to a hit-and-run victim and then fire back on Twitter that someone who’s actually suffered just doesn’t get it.

What Cracked needs is some sort of web presence that doesn’t rely on shutterstock-ish photos to illustrate poorly thought-out, unfunny tripe. And Clay needs a refresher course on quality-lede construction.

I know not why the person who ran me over fled the scene, but I’m sure it was hilarious. I’m sure other victims of unsolved hit-and-runs feel the same way.

Making light of people being hit by cars is no classier than making fun of people who suffer sexual assaults. And it’s time for people to stop pretending it is.

You guys lemme know – is this article insensitive to victims? http://t.co/7l5s9tl8wb

← Hit-and-Run America, Vol. DCX
Yeah, That Was Me Chilling In The Background Of CBS3’s Story On Milton Street →