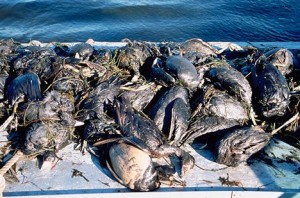 Maybe I just should’ve waiting till today to post the reading roundup till today. But I didn’t. So, I have some follow-up action is necessary. Short-and-sweet style …

Bronze: A police chief from Massachusetts says a property-tax cap like the one proposed in NJ hurts The Man; an odd financial offshoot of TBI deaths: student-loan-altering legislation; and an odd legislative offshoot of a football career: Jon Runyan digs offshore drilling. (Inquirer)

Silver: A week late on this one, but the Times Magazine had a compelling piece about the future of Atlantic bluefin tuna. Long story short: It ain’t so rosy. Long story less short …

Until the modern era, the response to wild-game decline has been a primitive one: widespread destruction of the animals that can’t stand up to our hunting followed by the selection of a handful of ones that we can tame. Out of the many mammals that our forebears ate before the last ice age, humans selected four — cows, pigs, sheep and goats — to be their principal meats. Out of all the many birds that darkened the primeval skies, humans chose four — chickens, turkeys, ducks and geese — to be their poultry.

And indeed, this is a process that is taking shape rapidly with fish.

Gold: Much has been written about the BP Oil Catastophe. Not much has been as good as Gary Smith’s story in SI, though.

Here, two days earlier, National Geographic photographer Joel Sartore had sunk thigh-deep in oil and realized he couldn’t get out; had he been alone, he likely would’ve died. On the beach Governor Bobby Jindal led Dudley straight into a pool of oil two football fields long, their shoes sinking into it with each step. Now that Jindal finally had BP’s big gun at Ground Zero, along with camera crews from NBC and CBS, his ostrich-skin boots would just have to be sacrificed. The guv found a piece of wood to use as a dipstick and held it in front of Dudley, looking for his response. “You can see pictures, but until you come here and see it, touch it, smell it, you don’t really understand,” said Dudley. “It’s … it’s tragic.”

Kerry Sanders, the NBC correspondent, wanted more. “Look over your shoulder,” Sanders ordered Dudley, camera rolling. “What do you see?”

Not enough. “Can we see it on your hands,” demanded Sanders, “and can you tell us what it is?”

Dudley, on a contrition mission, scooped up the goo and gave NBC its money shot, blood on his hands. “This is oil from right here,” he recited dully.

Not enough. From the railing of a boat that the group had climbed aboard, CBS’s Harry Smith pointed to a phalanx of orange, fist-sized tar balls. “This is your oil,” declared Harry. “Do you feel guilty?”