I just got done watching the latest episode of Frank the Entertainer in A Basement Affair. You know, the one about the guy who sucked New York’s toes moving 15 dames into his parents’ NY home in an attempt to find love everlasting.

So anyway, Frank the Entertainer ends up kissing the Olive Oyl look-alike and votes the blonde petite Asian chick Tammy off the show. I mention this because I wholeheartedly disagree with his decision. I just wanted to go on the record with that fact. Tammy was kind. Tammy deserved better.
(As a side television note, I’d also like to shout out IFC’s ‘Cooking with the Band,’ which is the first “foodie” show that I’ve actually been able to not only tolerate, but enjoy. Sam Mason, you’re dope.) 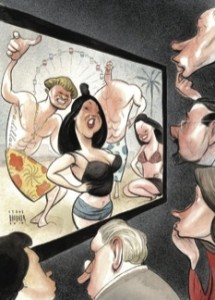 Oh Snooki, you so crayzee

Now that that’s out of the way, let’s get into the reading. Like, the New Yorker piece on Jersey Shore which includes the passage …

Unless the show manages to make us feel as though we were anthropologists secretly observing a new tribe through a break in the trees, it hasn’t done its job. MTV has succeeded on that score; it can give itself a pat on the back for enabling viewers to feel superior to at least eight other people. (Then it can stop patting itself and slap its forehead for not having realized that nobody says “Jersey Shore,” and that the title should have been “The Jersey Shore” or “The Shore.”

Also in the New Yorker, local scribe Don Steinberg’s Americabowl.net gets some play.
Maxim magazine deems Philly it’s Favorite Beer Burg and taps Victory’s Helios Ale as one of the top 25 new beers in all the land. (Couldn’t find a link to the story, though.)
And finally, from the New York Times (sorry, Inky, your Sunday issue was light on interest), Frank Rich calls out the Tea Party Movement for what it really is. Namely…

The entire Tea Party Convention is a profit-seeking affair charging $560 a ticket — plus the cost of a room at the Opryland Hotel. Among the convention’s eight listed sponsors is Tea Party Emporium, which gives as its contact address 444 Madison Avenue in New York, also home to the high-fashion brand Burberry. This emporium’s Web site offers a bejeweled tea bag at $89.99 for those furious at “a government hell bent on the largest redistribution of wealth in history.” This is almost as shameless as Glenn Beck, whose own tea party profiteering has included hawking gold coins merchandised by a sponsor of his radio show.
Last week a prominent right-wing blogger, Erick Erickson of RedState.com, finally figured out that the Tea Party Convention “smells scammy,” likening it to one of those Nigerian e-mails promising untold millions.

… and it shows us what America would be like if the Tea Parties actually attracted, you know, smart non-racists and unxenophobes …

All across Europe populist parties are growing, capitalizing, to an extent unknown across the Atlantic, on a very old-fashioned brand of propaganda art. The dominance in America today of the 24-hour cable news networks and the Internet, the sheer size of the country, the basic conventions of public discourse, not to mention that the only two major parties have, or at least feign having, a desire to court the political center, all tend to mitigate against the sort of propaganda that one can now find in Europe.
It manages, if often just barely, to skirt racism laws.