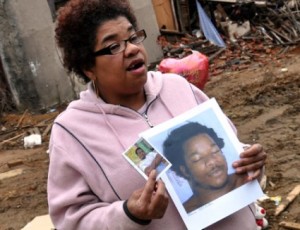 Back in ’06, my work and non-work worlds collided when Robert Pierson, a 17-year-old from Fairmount (a neighborhood in Philly, for those out-of-towners) who used to hang out on my stoop from time to time, was gunned down a block from my old apartment. I knew Robert. And I knew many people who knew and loved him. So it went without saying that I’d write about the impact the killing and the trial‘s result had on old-school Fairmount, the people who were there before it got cleaned up enough to hike property values over 300K.
Well, last night, I got a call that one of the five North Philly suspects, Brian Crosland, who’d gone to the “white” neighborhood to jack some people with a gun smuggled out of one of their relative’s homes, had been shot and killed in an apparent robbery. He sticks out in my memory for two reasons: One, he threw the bottle that amped up the altercation that left Pierson dead and two, when he took the stand, he seemed geeked up on some narcotic to the point that the trial felt ludicrous.

Though this was a case involving a youth who died at the hand of other youths in a neighborhood not used to such violence, the trial seemed relatively rote until Brian Crosland took the stand. Depending on who you believe, Brian was either “high” on the stand (Nenner); failed by a putrid culture and education system (me); or “the way [he] think[s] is different than everybody else” (himself).
Infuriating survivors, he giggled, constantly swiveled in the witness chair, made faces and hid his eyes behind evidentiary documents when talking about going after “white people.” (“They think it’s funny because they’re getting away with it,” a Pierson supporter said.)
When his friends later told him that Quinzell shot somebody — he ran early, too — “I’s like, yeah. Cause I saw him. He had it in his hand and was pointing it in front of him.”

I’m sure some might be thinking “what goes around comes around,” but I’m thinking there’s now another Philadelphia family left in tatters to deal with the blowback from unchecked violence on our streets.

2 comments for “Violence, in violence’s wake”