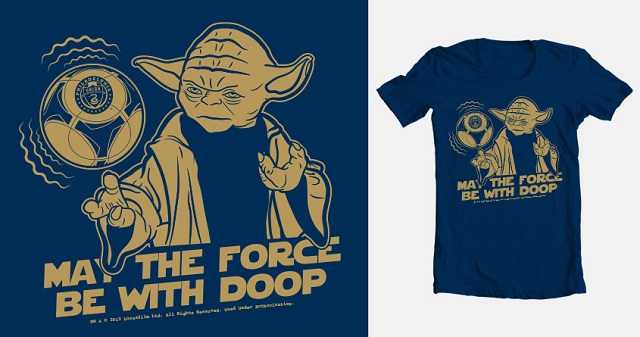 I like futbol. I like Star Wars. So I really like the cut of the Philadelphia Union’s jib when it comes to “Star Wars Day” on May 4, when the Chester side hosts the Seattle Sounders.

Union fans attending the match will have the opportunity to watch pre-game training from field level, as the first 100 participants to check in for a Star Wars costume contest will receive access. Additionally, one grand-prize winner from the contest will be named honorary captain for the match and participate in pre-game ceremonies on the field.

Philadelphia Union also have a special “May the 4th Pack” available for fans interested in attending the match. Four tickets and four limited-edition Star Wars-themed Union T-Shirts displaying “MAY THE FORCE BE WITH DOOP” on the front will be available for $150. The limited-edition T-Shirts will also be for sale that day in the Union Shop with all proceeds benefitting the Philadelphia Union Foundation.

← Hit-and-Run America, Vol. CDXXIII
Just Another Example Of CNN Being Asleep At The Broadcast Wheel →