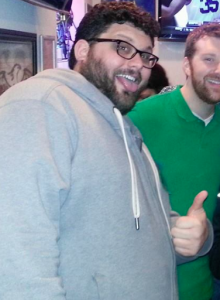 It was with great joy that I wrote a column about jitbag sportstalk-radio host Josh Innes, who got canned by WIP in Philly for being, well, a jitbag.

I was particularly happy about Joshy boy hitting the unemployment line because, in talking about a column I’d written about a potential Nova hoops parade in Philly, he said I should go play in traffic.

Which is really, really funny, considering my wife was almost widowed because I got hit by a car back in 2008.

Many people have reached out thanking me for nailing that jitbag’s professional coffin shut in Philly (see here).

But with all folks who appeal to the lowest-common-denominator tendencies of slower people, not everybody liked it! In fact, one person who I went to high-school with was so enamored with the jitbag’s radio presence that he created a commenter account just to say weally weally mean things.

Good stuff. The reunion should be fun in November.

Anyway, that comment got under a lot of people’s skin (not mine!) and one such person ran a background check on my old classmate (and current Facebook-blockee). Offered me his phone number and address. I said thanks, but no thanks, as I have no interest in engaging a Delaware trailer-park resident.

Here’s hoping my posting about said comment, however, brings my old classmate the attention he sought.

← Hit-and-Run America, Vol. DCCXI
Today In ‘Randy Quaid Liked One Of My Tweets’ →