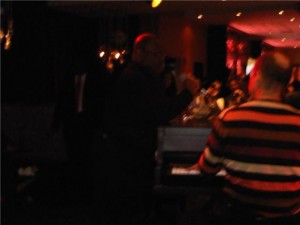 So, last night I hit the Metro‘s 10th anniversary party. Good times, good people. We also hit the Metro’s 10th anniversary post-party. It was at Jolly’s, the piano bar that moved from 17th and Walnut (across from the Philly Weekly office when I was a staffer there; also why I can’t get the “Jolly’s NOT SO JOLLY!” chant from some sort of disgruntled ex out my head) to 20th and Chestnut.
Douchey neighborhood, yes. Good spot, though, also a yes. Snapped this piss-poor BlackBerryPicture when I saw something I hadn’t seen before and don’t expect to see again. Unless I’m still writing a column for them in 2020 and able to sip Stoli Orange still.
That’s beside the point, the Stoli. Here’s the point: Dude got up on the mic. Burly dude. And what’d he sing? Etta James’ At Last. F’real f’real. And you know what? He was pretty damn good. So if you know the dude, give him an attaguy for me. I wish he’d have gotten all the attention that Arthur Kade got. What’s that, you don’t know who Arthur Kade is? Don’t worry: Nobody does anymore. And I apologize to those whose lives I forced him into way back when my head was still kinda goofy.