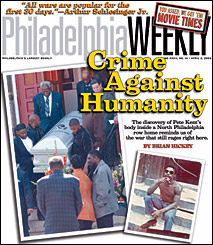 Back when I’d picked myself up off the brain-surgery ward and started to write again, I’d gotten a few emails asking how to find some stories I’d written before. Strangers wanted to know, which I considered complimentary, not rubbernecky. Initially, I just sent links, but I figure on slow-post days, I’ll just excerpt one of my clips and provide a link to read more if you’d care to.
I’ll start with Pete Kent since, well, it’s the most disturbing tale I’ve encountered in Philly (And one that made me keep in touch with his survivors to this day). It ran in the Philadelphia Weekly in April 2003:

The first call Letrese Bryant got was from her mother, Earthadine Christy. Turn on the news. I think something happened to your father, her mother hurriedly said.
It was Friday, Feb. 28, three weeks since Bryant last saw Pete Kent, and television cameras were encamped in the alley behind 1520 N. Eighth St., a vacant shell on a North Philadelphia block that’s often overrun with junkies and dealers once darkness falls.
A body had been found face down under an old chandelier, pieces of wood and other debris. The discovery wasn’t startling. Shooting galleries often attract overdoses. But this one wasn’t going to be so easily explained. When police turned the body over, every run-of-the-mill theory vanished.
The man had been cut from his neck to his stomach. His chest was ripped open “like a frog in biology class,” as one investigator noted. The frozen victim’s heart, liver and kidney were gone, and part of his esophagus was missing. His throat had been slashed and a rope had been tied around his neck.
That was the story that greeted Letrese Bryant–a 30-year-old unemployed medical assistant who lives near Seventh and Hunting Park–when she turned on the TV. The reporter’s exact words remain a blur, but the images are forever etched in her mind.
The cameras focused on a white blanket with a blue, pink and yellow floral pattern–just like the one Kent took when he left his daughter’s house for the last time. It not only caught Bryant’s eye, it left her dazed on the couch.
The police said the victim was in his 30s, but she panicked anyway. The crime scene was only a block from where her 60-year-old father worked, and nobody seemed to know where to find him.
Unable to shake a sickening feeling, Bryant watched a police officer hold up a gray and white sneaker with two fingers, examining the newly found evidence. She doesn’t know if it was the pattern, the shoe size or what it was, but right then and there she realized her father wouldn’t be coming home. Ever.

← “The only thing better than the cutest kitty in the world is any dog.”
Weekend Reading Roundup (Frank the Entertainer Edition) →

3 comments for “My Favorite Stories”