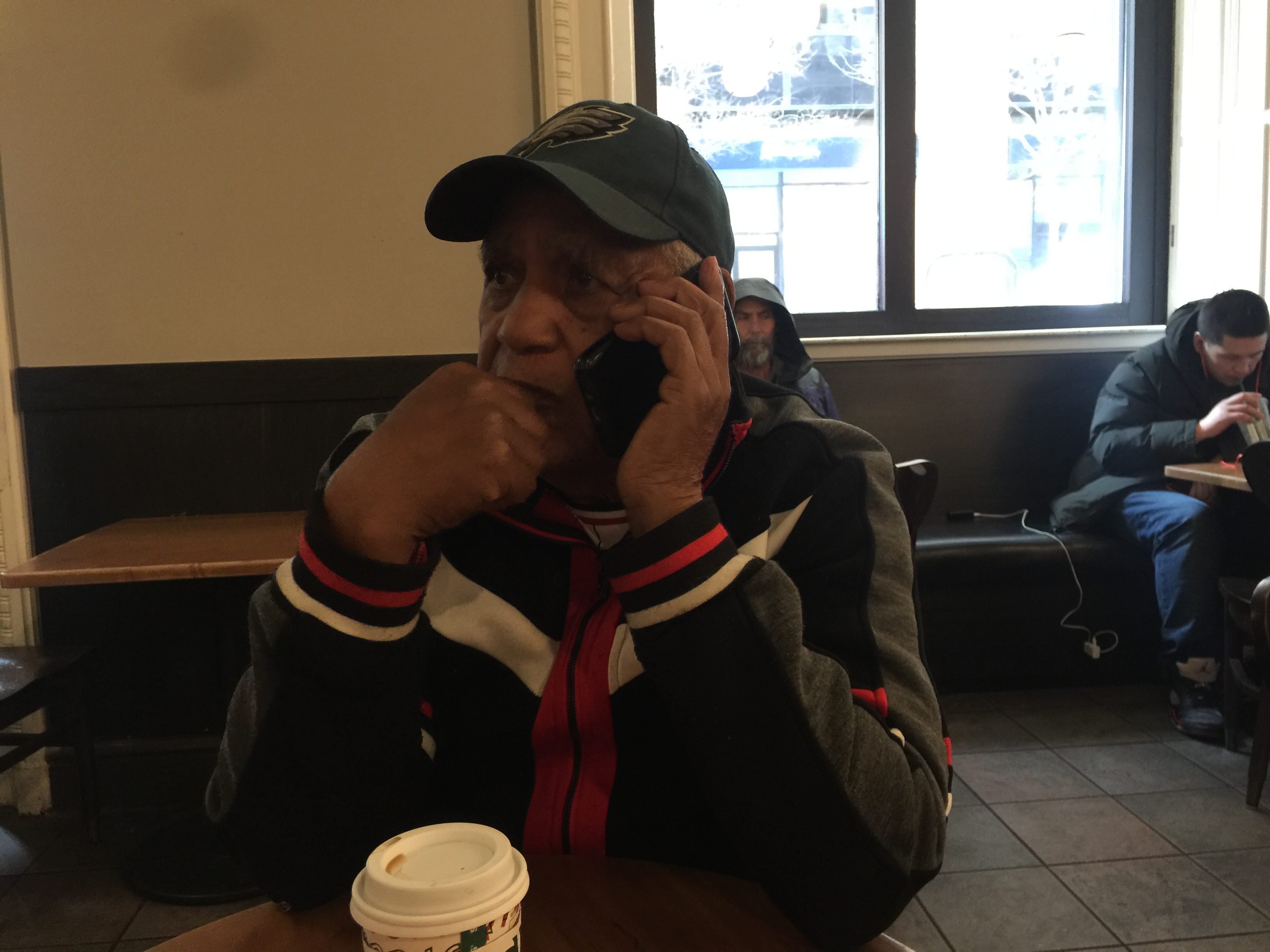 Writer’s note: This post has nothing to do with my current job, but an old friend who reached out from my journalism days to get word out about the difficult medical times he’s facing.

“I have not up to this point left my footprint in the world.”

It wasn’t the first time I met Milton Street, but it was certainly the most memorable insofar as rising to the top of the heap of stories I covered – while a journalist – in Philadelphia.

Yeah, I’m talking about the 2008 “press conference” during which he was draped atop a coffin outside City Hall to draw attention to the plague of violence in the city. It was a campaign kickoff of sorts for his mayoral candidacy.

I needn’t describe it much further. If you’re Philly, you already know that this video captures its essence.

While that easily cemented Milton as my favorite character to cover in the city, there’s much more to the man than that.

Cast aside as a lunatic in some quarters, there was always a method to Milton’s madness, even when he became an outspoken Uber driver. Heck, I even had him show up at Quizzo night as a guest speaker.

He was on point with the issues impacting the city at large, and the African American community in general.

When he talked about the community needing to reclaim its streets through vigilance, he wasn’t wrong. That he cast it in the spirit of, oh, needing to train 5,000 people to become a paid Kung Fu community protection force was just the Milton twist that many of us came to love despite knowing full well that most of his political campaigns would not end in victory. (And his ideas often eluded the coming-to-fruition phase.)

He had his time in Harrisburg. And in Philadelphia. And in South Jersey, a place that was an eternal struggle for the man, as the “haters” say he was a resident there and thus ineligible to seek office across the Delaware River in Philadelphia.

Now, on New Year’s Eve – as 2019 was hours away from becoming 2020 – he’s sitting in a Starbucks at 11th and Chestnut streets talking about more pressing personal issues.

It was the same area of town where, last decade, after serving sometime in the federal pen because of tax issues, he told me that he was running for mayor. It was an exclusive scoop. I was proud to break it.

But now, it’s become the same area of town where Milton wanted to go public with the reason why his independent run for mayor in 2019 never gathered the requisite steam that we’ve come to expect from his endeavors.

Early in the summer, Milton was diagnosed with prostate cancer. The disease has spread. To hear the doctors tell it, the 80-year-old hot-dog vendor and mayoral brother turned civic treasure doesn’t have much time to live.

So, he’s here to offer some medical advice, from someone who learned the hard way. But he’s not here to say goodbye yet.

Sitting down with a black coffee at the Center City Starbucks, he starts talking about having felt pain in his lower body for a while, even before he “kinda disappeared” after announcing his independent bid.

A blood test led to a biopsy. He said his PSA count rose from 127 to 354. That’s when he knew his life cycle – “you’re born, you live and then you die” – was nearing the last phase.

“The cancer cells were germinating, feeding off my body,” he said. “The biopsy said there was cancer not only in my prostate but in my bones, by back, my spine. Almost everywhere. They said it was terminal, stage four, not curable. But, it’s sustainable with new procedures they have in place to keep it from spreading.”

Milton reckons he’d be either dead or bed-ridden hadn’t he exercised and changed his dietary intake to vegetarian-inspired: “Smoothies every morning. If I hadn’t been doing that, I may be underneath looking up by now.”

“I have not up to this point left my footprint in the world. All the work I’ve done politically, and this is where I end up?” he said. “Nope. I always find some good in everything that’s happened to me in life.”

To that end, he’s equated his personal medical battle to that which is facing the black community, where “93 to 95 percent are good people, so we have to attack the problem like it’s cancer. There’s nothing besides feel-good programs that don’t zero in on the 5 to 7 percent that are bad. People in the community know who they are. They’re the antidote.

“I’m not going to sit on the couch and just die. I’m not going to stop doing what I’m doing. But I want people to know that there’s a legitimate reason why I didn’t follow through with the November election. I didn’t understand what was going on with my body, and you can’t fight what you don’t know.”

Despite the dire prognosis, he hasn’t given up hope. He feels like he’s going to be around for a while, while accepting that it’s going to be a difficult road ahead. He didn’t have concrete plans to turn around the violence that plagues a city which suffered more homicides than anytime in the past decade as he spoke. He just noted that he’ll redouble his efforts.

“This is the biggest fight I’ve taken on. I have to develop a new normal, be careful that my bones don’t get too brittle, lose my equilibrium and fall down,” he said. “I’ve mentally put myself in a frame of mind where I have to function in this new normal.”

He finished a 10-day radiation treatment at a local hospital on Christmas Eve, and started with the hormone injections in the days since. (Eliminating testosterone from the body will help prevent the prostate mass from impacting his “elimination” tracts, he said.)

HE’S NOT GIVING UP

No, doctors didn’t give him a countdown to how long he has to live. His independent research determined that people in his condition have 10 or 11 months to live.

“That’s not a real consideration for me. I’m not worried about how many months I have to live,” he said. “I’m worried about what I can get done during those months. I have no interest in beating it. I have interest in controlling it until I die. How do you beat something that’s already in your bones, and lymph nodes? It’s an impossible task. It’s like saying I want to climb Mt. Everest barefoot. To do nothing would be like trying to remove a mosquito from your testicles with an axe.

“In my experience, nothing happens without thinking about it first. So, I’ll keep a positive mindset while adjusting to my new normal. I can’t ride a bike like I used to. I can’t work out at Planet Fitness like I used to. You have to have a new mindset, and I’m an older person with a serious disease now.”

And, that mindset traces all the way back to the coffin press conference, and the Kung Fu task force, and finding money to find neighborhood security groups to help the police do their jobs like a Police Advisory Board established in each PPD district.

“I want to complete this mission. I’ll do what I have to do. That’s my signature ambition,” he said. “There’s good in every situation. This will be my good. I’m in the home stretch of a marathon I’ve been running to do something about the violence in Philadelphia.”

He hearkens back to his time as a state senator when he flipped from Democrat to Republican because those in the majority have a better chance of affecting change. And how he pushed for gambling to help fund city schools.

“People called me a loose cannon; said I was out of my mind. But I’ll tell you what: I was ahead of my time. I said this was going to happen, and it did. I feel sorry that there was a level of brilliance that people were unable to conceptualize.”

Before our chat ended, Milton returned to his primary point, before heading over to speak with a homeless man who’d approached when he recognized him.

“All that I’ve been through in life is not as challenging as what I’m facing right now,” he said. “I haven’t completed my purpose. I can’t allow this problem, this cancer, to be an excuse that stops me from completing my purpose.”