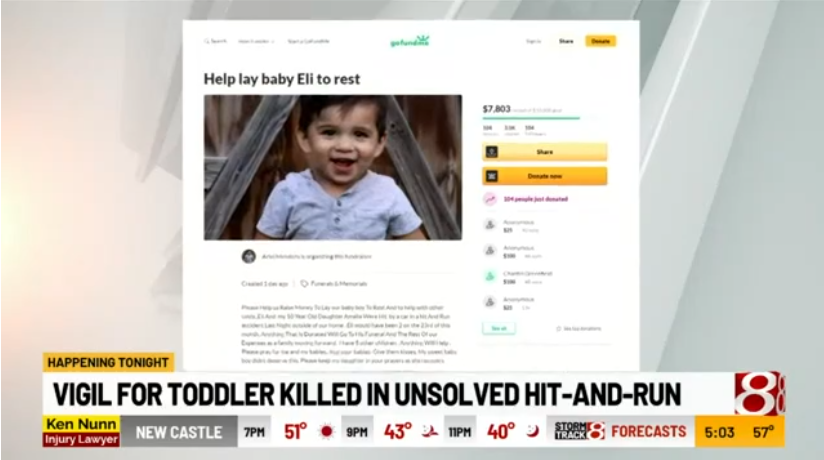 11071. “The family started crossing the street when the light indicated they could cross,” Tucson Police Chief Chris Magnus said in a statement on Twitter. “The two boys were crossing in front of their mother when a light-colored BMW SUV failed to stop and struck both boys.”

11072. “Just a glow in life,” said Scott Benson, a close friend of White. “She gained energy from sharing with other people and really lived to serve and care for others.”

11073. LOS ANGELES (CBSLA) — A former police officer is charged in a 2018 hit-and-run in the Lakewood area and causing moderate injuries.

11074. “It was horrific. It was very scary, he was non-responsive so I thought ya know….it was just really bad, really bad,” said Gallion’s mentor, Tony Scroggins.

11075. A 39-year-old woman was arrested in Martin County on Thursday night in connection with the fatal hit-and-run earlier this week in West Palm Beach that left a pregnant mother dead and her 3-year-old infant in critical condition, police said Friday.

11076. The man believed to be responsible for the Sept. 28 hit-and-run of a Cottonwood bicyclist was arrested Friday after he was captured by local citizens.

11079. “This 52-year-old male, last known address is in New York. So we don’t know what he was doing in the immediate area, but we know his vehicle is pulled over on the side of the road, and we believe he was going to a nearby lunch truck, which is pretty common in this particular intersection,” Philadelphia Police Chief Inspector Scott Small said. “The victim had severe head trauma.”

11080. According to police, an 11-year-old girl was struck by a vehicle Wednesday while crossing the street near the intersection of Hefner Road and Western Avenue. After striking the girl, the driver sped away from the scene and headed east on Hefner Road from Western Avenue, police said. The crash left the child seriously injured.

11081. Police said a 19-year-old man and woman were crossing the street just after midnight Wednesday when they were struck. The disturbing video shows the driver turning the corner slammed into the pedestrians and drove off. One of the victims was tossed to the middle of the road, the other tumbled onto Lee Avenue after being pushed by the car.

11082. Fort Worth’s Aviation Director was fired last month amid allegations he was involved in a hit-and-run accident and the city manager later learned that he was hunting on airport property and owned an aviation company which he did not disclose as a potential conflict of interest, according to his termination letter obtained by NBC 5.

11083. HARRISBURG, Pa. (AP) — A man was killed after a car hit his motorized wheelchair and fled the scene in Pennsylvania’s capital over the weekend, police said. Harrisburg police were called to the scene at about 4:30 p.m. Saturday and found the man with severe injuries.

11084. “I really just can’t believe this happened to her,” Critton said. “She’s at a point right now where she can’t talk to me, she can’t really say anything, all can see are the expressions on her face.”

11085. A local Denny’s is raising funds to help the Lautaire family after a 9-year-old boy was killed and his 10-year-old brother was injured in a hit-and-run.

11086. In August, the ABC27 team introduced viewers to Anthony Williams and told the story of his stolen wheelchair. Afterward, the community came together to get him a new one.

Williams was riding that same wheelchair Saturday night when police say a car hit him near 13th and Herr streets. The driver fled the scene.

Emergency crews rushed him to the hospital where he later died.

11087. “She went in there saying she was the victim and that she needed help, but that she is the one that ran someone over,” said Brown.

11088. “My husband and I were getting ready to go to bed and I heard a big thump. I came out to check it out and the child was laying in the middle of the road,” said one neighbor Elizabeth.

11089. “Since I arrived at the hospital unconscious I still don’t even know exactly where I got hit, making the chance of catching the person nearly impossible.”

11090. A $5,000 reward is being offered for a tip that leads to the driver of vehicle that struck and killed a Shelby Township woman as she walked across a street, police said Friday.

11091. According to police, the driver slowed down in front of Benitez’s fruit stand and then stepped on the gas and intentionally ran her over in a San Bernardino parking lot.

11092. “Please pray for me and my babies,” she wrote on a page raising money for funeral expenses. “Hug your babies. Give them kisses. My sweet baby boy didn’t deserve this.”

11093. “I couldn’t see that well because there was so much blood and stuff on my face,” Tunnell said.

11094. A man in a wheelchair was killed early Sunday morning in a hit-and-run crash at a central Fresno freeway on-ramp, according to Fresno Police.