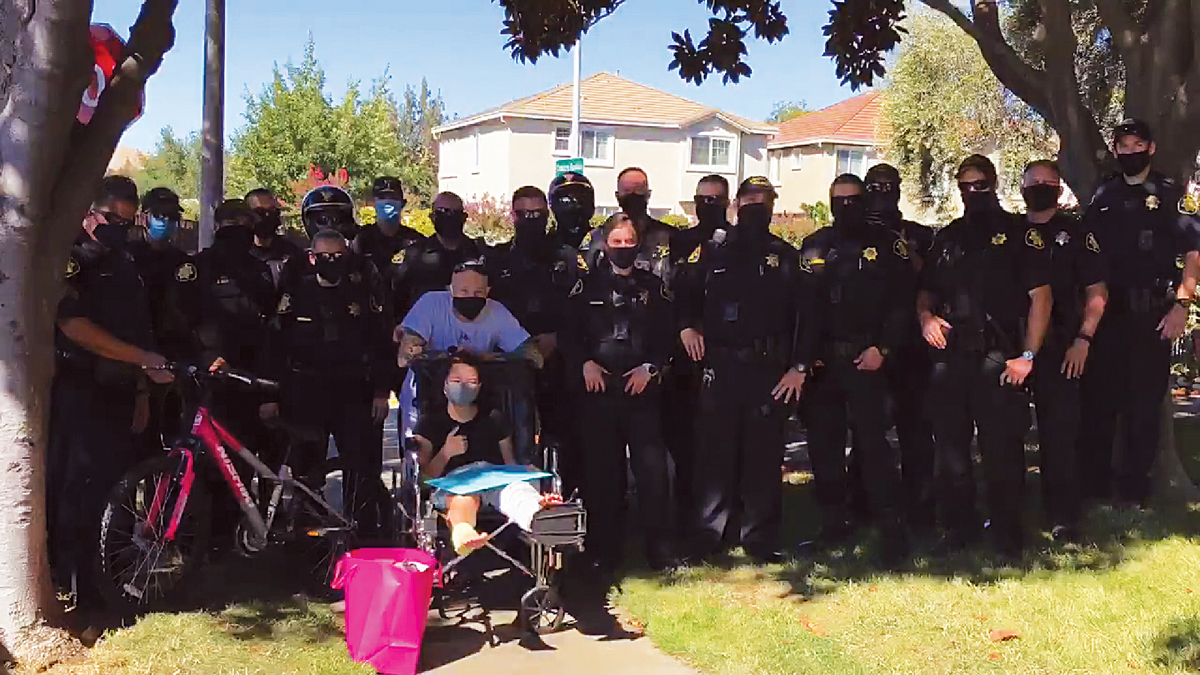 10978. A composite sketch of a driver who got out of his BMW after fatally striking an 87-year-old man in the Westlake District, then got back in the sedan and took off, was released this week by investigators.

10980. Police on Long Island have made an arrest in a hit-and-run that critically hurt an 11-year-old boy on a scooter.

10981. A wrongful death lawsuit in the death of 5-year-old Kamerynn Young, killed April 1, 2020 in a hit and run accident at the intersection of Parkway East and Springville Road, takes a deeper look at the Birmingham Police Department’s policies when it comes to car chases.

10982. “My son was left in the street with broken legs. And I hope his screams haunt her in the middle of the night until she turns herself in or she’s caught,” Borges said.

10984. Abilene police are looking for a hit-and-run driver that hit a 13-year-old boy, fracturing his skull.

10985. “It has taken two months,” Mandi Jackson, wife of Robert Jackson said. “It has taken to this day for Jillian’s parents to actually be brought into Bridge City Police Department and given solid, good information, a suspect and a plan of action.”

10986. A gruesome hit-and-run collision involving a car and a bicycle on Wethersfield Avenue in Hartford shortly after nightfall Thursday left the cyclist dead and neighborhood residents calling for better traffic enforcement and more police.

10987. In a follow-up interview with investigators, the complaint said Pierce indicated he had four 12-ounce cans of Miller High Life around 8:30 p.m. on Aug. 8, and smoked one of “four or five marijuana blunts” he smoked that day, but “didn’t believe he was intoxicated” at the time of the crash. Near 27th and Kilbourn, Pierce said he “struck something,” but didn’t know what he hit, so he drove away and parked at his house.

10988. “We have all been touched and inspired by her positive attitude and resiliency,” the Police Department posted on Facebook post. “We also gave her 8-year-old brother a gift for being so brave during the entire ordeal.”

10989. North Las Vegas police are investigating a hit-and-run crash that injured a man and a killed dog Saturday evening.

10990. Christopher Currid, 4, was carried to a nearby fire station by his father and later taken to St. Christopher’s Hospital. He has been listed in critical condition. Police say the boy was struck as he walked away from an ice cream truck.

10991. Police in Queens are hunting for the hit-and-run driver who blew through a yellow light and slammed into a pedestrian in a crosswalk.

10992. A woman was struck and killed by a hit-and-run driver Friday night in the city’s Cobbs Creek section. It happened at Cobbs Creek Parkway near Catherine Street around 8:15 p.m.

10993. Police are searching for the driver who, they said, fled after fatally striking a 14-year-old boy who was out riding a bicycle in Bal Harbour.

10994. A vocal Black Lives Matter activist who says Tampa police officers recently reaggravated injuries she suffered when a truck drove into her during a June demonstration is turning to a prominent civil rights attorney for help.

10995. “Please, please, please help out. She is a beautiful soul, and she did not deserve what happened to her,” Ford said.

10996. Just minutes after midnight on Sunday, a large crowd filled the street to watch an illegal drag race. Suddenly, a white vehicle swerved out of control into parked cars and spectators. A 45-year-old woman was rushed to the hospital in critical condition. Police say three men inside the white vehicle fled the scene.

10997. PLYMOUTH — A New York man allegedly told police he struck a pedestrian with his vehicle because he was looking for a face mask while driving.

10998. New Rochelle police are on the hunt for a driver who hit a 90-year-old man and left him for dead.

10999. Police say the woman was standing at the crosswalk, and the Mustang appeared to be slowing down at the stop sign to let her cross. But that’s when the car struck her.

11000. A skateboarder died in a hit-and-run crash in Visalia Thursday night.

11001. YORKTOWN — A Scarsdale bicyclist who was struck by a driver near the North County Trailway on Sunday has died, police said.

11002. Dallas police are searching for a hit-and-run driver who they say seriously injured 16-year-old Jaylssa Zaragoza as she crossed Lake June Road on August 21.

11003. Kenner, La. police are searching for the driver behind a deadly hit-and-run Thursday night that claimed the life of a pedestrian. Investigators said 48-year-old Brian Jones was crossing Veterans Boulevard near Bainbridge Street when he was struck by a vehicle and killed.

11005. Bicyclist safety ought to be given significantly higher priority and seriousness by law enforcement. In every instance where a vehicle and bicycle collide, the bicyclist always has the disadvantage. This is a matter of physics, but it should not be so as a matter of law. Go after hit-and-run drivers and prosecute them. Investigate all vehicle-vs.-bicycle accidents and reports of drivers who endanger cyclists with aggressive driving. Treat every instance as if the cyclist was killed.

11006. A hit-and-run crash left two children dead after they were flung from the vehicle they were riding in Sunday morning in North Philadelphia, police said. The two children, boys 7 and 9 years old, were riding in a car with their parents when another vehicle hit them around 12:30 a.m. near the intersection of Hunting Park and Kensington avenues in the Juniata Park neighborhood, Philadelphia Police Department Sgt. Eric Gripp said. The force caused the kids to be ejected from their car, killing them.

11008. “He may never talk again, he may never walk again, these are the things that they’re telling us,” said Carolyn Zirkelbach, Christopher’s mother.

Christopher, affectionally called “Moose” by his family, spent 10 days in the Intensive Care Unit. His breathing tube was recently removed and his condition is slowly improving.

“He’s still young and he’s strong, so hopefully he can bounce back,” said Bobby Currid, Christopher’s father. “I just thank God he’s still breathing with us and he’s still here with us.”