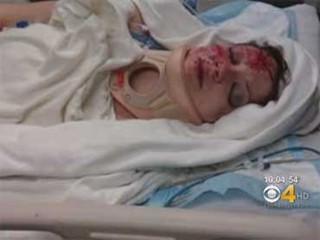 973. Revere, Mass. Oct. 11. 40-year-old woman struck and killed by a 2005 Chevy Malibu which fled the scene. A U.S. Postal Service police officer, who witnessed the incident, later saw the sedan parked on a street and called police. Driver then arrested.

975. Pinellas Park, Fla. Oct. 10. 20-year-old newlywed riding a bicycle struck by a silver Toyota Highlander and fled “as the woman clung to the roof of the sport utility vehicle and a witness chased after the runaway SUV. … She hung on for about 20 blocks, a stretch that police say would have lasted about 30 seconds, until the driver made a U-turn and she fell to the pavement.
‘I don’t have words for whoever did it,’ said Renee Simmons, Bush’s 16-year-old niece. ‘It’s ridiculous to not stop if you know you hit someone. Who does that?'”

976. Mankato, Minn. Oct. 10. 24-year-old man suffers serious injuries after being struck by a car which fled the scene. A witness followed it and called police; the driver and passengers took off, but were later found.

979. Indianapolis. Oct. 11. 24-year-old pregnant woman struck and dragged 100 feet by a pickup truck. The driver then got out of the truck and tried at least twice to pull her out from under the vehicle, before driving away.

980. Pittsburgh, Pa. Oct. 12. 41-year-old man injured after being struck by a white Chrysler which fled the scene. 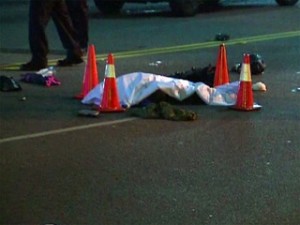 981. Huntington Park, Cal. Oct. 12. 55-year-old woman struck and killed by a newer model, dark Ford Expedition or Lincoln Navigator with tinted windows and stock wheels that fled left her dead in the street.

I don’t even know what to say about this one, so I’ll let this one speak for itself …

After being denied pain medication at an Indianapolis hospital, a man faked a hit-and-run accident early Tuesday morning, according to an Indianapolis Metropolitan Police Department report.

A man who has been questioned over the discovery of a body beside a road in the New South Wales Hunter region, has told police he thought he hit a kangaroo.

WACO – A local Disc Jockey faces another charge from a Sept. 26 accident that left a woman seriously injured. William Darren Prater, 38, who uses the on-air name of Darren Taylor on 97-FM turned himself in to police today after they charged him with a third degree felony of Failure to Stop and Render Aid.

BLOOMFIELD, Pa. — Police said the victim of a hit-and-run took matters into his own hands Monday to stop the driver from getting away.

“I went under, like, I guess he hit my side first, and then, I went under the car, and he reversed back over me and went the other way and drove off,” she said. “I just heard them, vroom, and drive through the crowd of people.”
Police believe they located the vehicle that struck Williams, but they have not found the suspects responsible for the hit and run. “I didn’t think this could happen. I see it all the time on the news, but when it hits home, it’s something different,” the victim’s mother said.

A woman struck by a hit-and-run driver near Coors Field is speaking out for the first time.
Heather Kornman, 27, (pictured) was walking in the crosswalk at 20th and Chestnut in LoDo on Oct. 3 with her friend when a westbound driver plowed into them and kept going.
Kornman says Timothy Albo, 26, pushed her partially out of the way and got the worst of it. While her injuries are serious, Albo has been in a coma since then.
“When I found out what happened my next thought was to Tim. And when I found out he was worse off than me it really broke my heart because it’s not something that needed to happen to anybody,” she said.

The FDNY has placed Firefighter Patrick Quagliariello on administrative duty while the NYPD investigates a deadly hit-and-run crash involving his SUV in Brooklyn.
One source familiar with the NYPD investigation told Fox 5 that the force of the crash that killed Manuel Tzajguachiac, 25, was so powerful that his clothing and personal belongings were found a block away.

A hit-and-run motorist sought in a 1996 crash that killed three men in Los Angeles is featured on “America’s Most Wanted’s” website and its Facebook page today, police said.