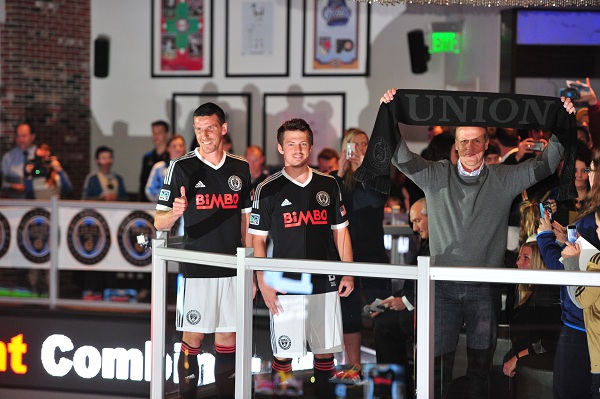 Just when you thought fashion folks would be limited in their presentation of the ad-text “Bimbo” on the jersey, along comes this. (For the record, I’m still partial to the original home kit).

Per the Union: “Chester, Pa. (Feb. 26, 2013) –Philadelphia Union today unveiled the team’s 2013 third kit at Xfinitiy Live! during a Meet the Team event. The club will officially debut the kit this Saturday in the season-opening match against Sporting KC at 4 p.m. on 6abc.

“The jersey is a tribute to the tradition of soccer in Pennsylvania created by Bethlehem F.C., one of America’s most successful soccer clubs (1911-1930). Featuring a black and white Philadelphia Union logo, the center shows a retro Bimbo logo, as well as a capital letter ‘B’ placed in the lower front corner to represent Bethlehem Steel F.C.

“Attached is a photo of Philadelphia Union players Sebastien Le Toux and Antoine Hoppenot in the full 2013 third kit during the event.”