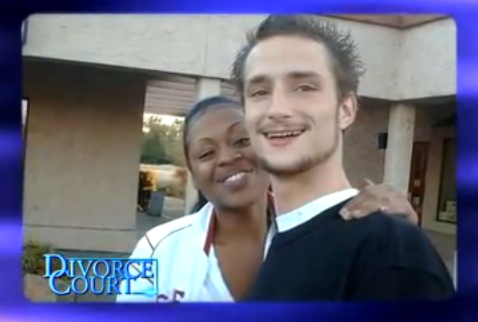 Not even three minutes into this episode of Justin Caluya is talking about getting black-out drunk to the point of getting blown before he got home and told her he didn’t want to bang her because he didn’t know whether he got an STD from the oral play.

He’s lauded for admitting this. Seriously. Lauded by Judge Lynn.

Anyway, it’s damn near impossible to take him a lick of seriously because of his whole Eminem speak (“She was thick. She was nice,” she said, describing her when she gets to talking about she put some pounds on post-pregnancy).

Just like it’s damn near impossible to take Deandra Gage seriously what with the purple hair and facepaint (whose mama tells her she’ll take care of her financially if she leaves him, which Justin assesses to skin color and Deandra agrees).

But then Justin loses all sympathy when they get to talking about how he let their kid suffer with a broken leg instead of waking Deandra up or rushing off to the hospital. Dude. That’s some weak sauce right there.