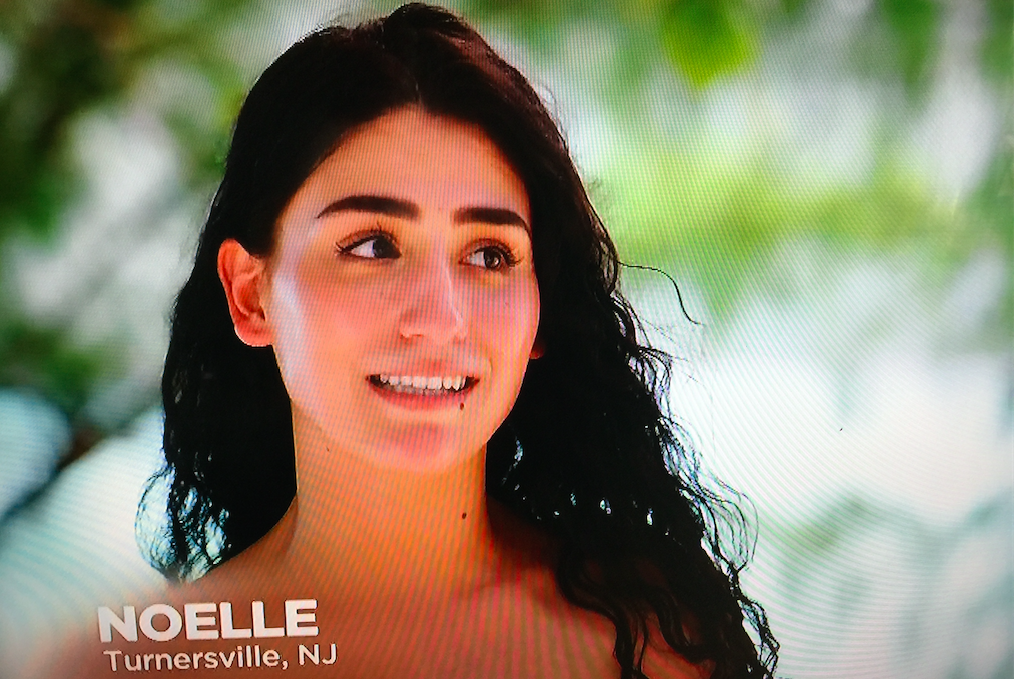 Well daggum, I need to do a little more research before plotting out “Dating Naked” stories that I can carry over to my professional sphere.

Just a couple weeks after a Philly guy (who I attempted unsuccessfully to interview through a contact at VH1), and a week after Brigantine’s Alexa Brunetti — about whom I wrote a couple stories at PhillyVoice — appeared on the show, along comes Noelle from Turnersville (South Jersey) who forgot David’s name briefly because “I was just, like, penis penis penis penis. David, that’s his name. Not penis.”

Their date is “swing yoga.” While naked. They do up-dog and down-dog. Noelle — a ballet and modern dancer by trade — didn’t worry about “what my vagina looks like right now.”

Later, they chat over frozen drinks. She talks about how most of the fellas in her past have been immature. Aw.

Natalie immediately notices similarities both looks wise and dancing wise between she and Noelle. She hopes David’s making a connection with her because she reminds him of her, and then grills him to a certain extent while rocking in a hammock.

Noelle notices this and worries if she’s trying to block her progress with David; the show’s edited so it looks as if she’s giving Natalie dirty looks in the pool.

So, she lifts her leg out of the water or something and takes him out of the pool for a jump into the bay or ocean or whatever it is that surrounds Bora Bora.

(Natalie still totally wants David, and I think the show’s geared toward that happening.)

Creeped out by her first date, Natalie fixates on Noelle in the water with David. She’s rather insecure.

When the second date comes along, she’s a dead ringer for the other two gals.

Says Noelle in the pool when they’re all together, “I personally have more boobs than butt,” while Jen said just the opposite.

“I think she’s too vanilla for Mr. Chocolate,” she says of her new competition, about who she’s now feeling defensive. “She’s cute but I don’t think she’s right for you. She has a nervous personality. You need someone who’s more loose and fun. That could be me.”

Jen later notes she has a weak gag reflex. “Alright, no competition there,” Noelle tells the camera. For obvious reasons.

She survives the elimination and will be back another week!