At the onset of this episode, David has his keeper Nicole and Natalie has her keeper Zakk. Natalie’s jelly of the other couple’s good fortunes, perhaps foretelling an endgame where star hopes to gallop off into the nude future with her fellow star.

We shall see. Here’s some observations from the episode itself:

David’s first nude friend is from London. Her name is Georgie. She’s a free spirit, and “an art muse” who’s wearing cat ears to mitigate her nudity. They wear plungers on their heads during a hula-hoop-themed date. She giggles a lot. It’s endearing.

Natalie’s first nude friend is from Texarkana. His name is Darius. He’s got dreads and uses this as his icebreaker: What animal would you be? She says an eagle. He takes that to mean she’s dominant. He says he’s smart. There’s evidence to the contrary. He likes bacon and cheese on burgers. That there’s evidence that maybe he is smart, until Natalie wonders whether he’d pick a bacon.

Darius shares a love of beer and peeing on oneself on Dating Naked. https://t.co/2BfQQcl8vF

She also pulled a muscle on their date that involved big inflatable yellow shoes in the water. 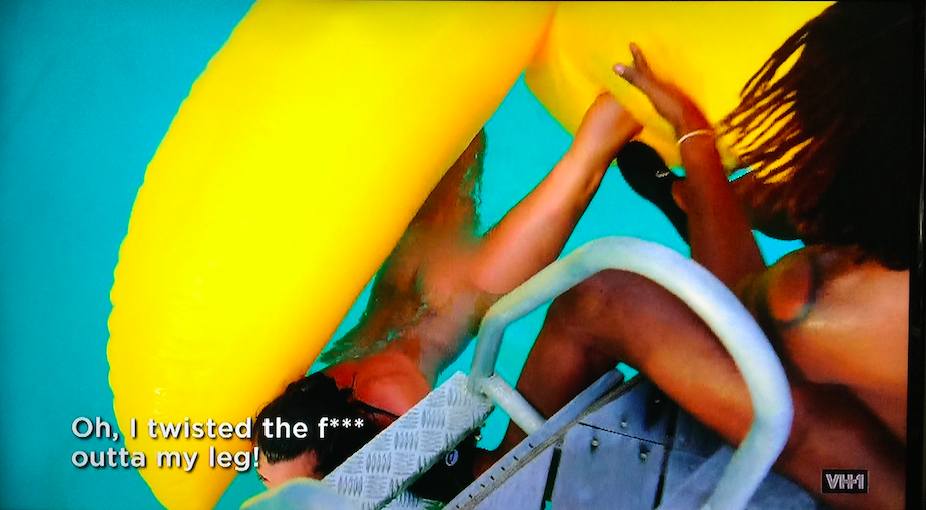 Anyway, Nicole is jealous of the time Georgie’s getting with David. So, they get amorous in the bedroom. Not all three of them, Nicole and David. “She slept over. We had a good time,” he said.

Onto the second dates: Hobbled Natalie meets the vampire guy Sam from Episode Four. She won’t know he’s a vampire until then. So, he’s talking about playing Pokemon in New York City and being a perfect gentleman (albeit one with a prominent dragon tattoo.) They do some cool underwater-gliding thing for their date. He later admits he’s recently divorced.

David’s second date is Sarah. She’s from Vegas so “nothing really shocks me anymore,” this despite having a track record that has yet to involve first-date nudity. She’s a waxer. And, a “well-endowed” one, per David’s non-blurred perspective.

They have him dress up like a lady in fishnets and heels for their date.

This show is so weird.

Sarah and the still-cloaked vampire are kept around for another week (justifiably and deceptively so, respectively).

And poor Georgie. She probably hasn’t meant anybody harm in her bubbly, happy lifetime.