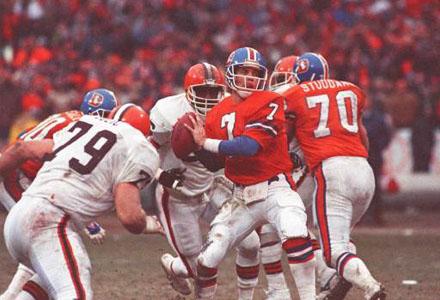 I’ve covered a lot of sad stories. Read them, too. But this one stings on a soul level, for John Elway has proven not to be infallible. Though I’ll still argue he is. And I’ll cut you if you say otherwise.

Former Broncos quarterback John Elway and a business partner invested $15 million in March with hedge-fund manager Sean Mueller, who was charged and arrested this week in an alleged Ponzi scheme, according to court documents. [Denver Post]

You say the word, John, and I’ll fly to Colorado to deliver a Colombian necktie. Even if you did marry a Raiders cheerleader, and even if you did endorse Tebow.

* By childhood hero, I mean a man who I staked out, like a borderline-stalky fanboy, at a pro-am golf event in South Jersey when I was 25; of whom I still have a framed photo on my home-office wall and regularly-worn jersey and framed signed letter that good friend Kristen arranged to have sent to me while I was recovering from that whole hit-and-run thing.