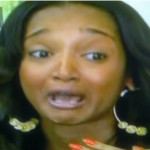 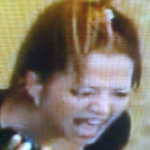 Brittany, 24, is a high-school math teacher who seemingly pronounces math as “maff.” She claims she’s the “most fabulous bride ever.”

Her fiance Bobby, a fourth-grade teacher, concedes that he’s about to marry the craziest person ever. He seems like a good sport about it. At least for the first two minutes of the episode during which Brittany presents herself as a egocentric lunatic.

They have a joint bachelor/bachelorette party. In their one-bedroom apartment. With wall tape indicating a VIP area.

She also has some sort of falling out with the hairstylist to the point that hairstylist will not style her wedding hair.

And whines about “being particular about people touching her feet” while she’s getting a mani/pedi.

And threatens to throw bridesmaid Jordan out of the wedding, dangling some sort of $200 deposit over her head.

And then calls family friend/florist Apostle in tears because she couldn’t afford the red roses for the centerpieces; pulling a pity-party effort to get something for nothing. She thinks she can get away with this because she “minored in psychology.” Apostle then shows up for a face-to-face discussion with the inflated-sense-of-self-worth horror-show of a human. Brittany then starts throwing the flowers around the room and tells Apostle to go in her wallet and buy the flowers FOR her.

“When I say red roses, I mean red roses. Point blank. Period. I don’t care if you’re volunteering your services for free,” she declares.

“You pay for nothing, you get nothing,” retorts Apostle, who is then thrown out under the threat of a 911 call to report trespassing.

Recap: This Brittany is such a shallow-minded narcisbag that she thinks she can bully someone who donated time and money to make her wedding better.

Bobby didn’t get the half of it right. Not only is this creature crazy, but she’s so full of herself that some self will soon ooze out her nose, ass and any unclogged orifice.

Liza‘s back and she’s talking about how she and Jason don’t use contraception because she had him tested for STDs and whatnot.

Shortly thereafter, she gets into a fight with her bridesmaids and they storm out of a dress trying-on affair at Liza’s apartment. She follows them out to their car, because they have the dresses in the trunk or something.

She yaps about how she’s the smart one and dares them to run her over. They back up into her slowly. Yes, playing around with getting hit by cars. That was the moment I realized Liza and her bridesmaids are the biggest pieces of shit on earth and declined to watch another second of their segments.