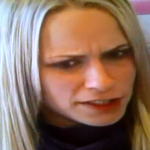 Danielle, a Bridezilla, also works on the show Bridezillas. She’s 33. She’s high maintenance. She bitches about her man Nate’s lack of money, like only a total unappreciative bitch could.

They’re showing her at work at the Bridezillas office bitching at her maid-of-honor sister Ashley who just happens to be from Philly because she’s not getting out to LA until the day before the wedding. This is a fair criticism. But acting like the crew shouldn’t be filming her in the office isn’t a fair activity.

She gets into a spat with the producer Malachai, who is gingery enough to evoke thoughts of Children of the Corn.

Then, along came a quote that I must bold for effect:

“I watch this show over and over again, especially working with the show and dealing with the brides,” she says. “And I completely thought that they were crazy bitches. But now that I am one of those brides, that’s planning their wedding, I’m completely on their side. I’m a Bridezilla just like them.”

This chick has to be from Philly, the way she’s acting (not to mention sis’s current locale). If so, this’d be the second Philly Bridezillas contestant of the season.

But she’s the first one I saw who directly attacked her man’s weight. He points out that it’s going from Bridezilla-psycho to flat-out rude. He’s right.

“That kind of hurts my feelings,” Nate says before she gets up and points out his gut. “I don’t want people to be, like, ‘Oh, look at that hot chick, man, and that frumpy, disgusting-looking man standing up there,’ because that’s really what you look like right now.”

Where Danielle is most misguided in that statement is the whole “hot chick” angle. Yes, she’s moderately attractive. The caveat: she’s attractive in a “looks like a weathered, yappy bird who got stuck in tar atop a telephone pole one extremely sunny week but the sizzle burn has started to fade” type way.

Anyway, she went to get a massage instead of tasting wedding cakes with her man. The wedding is so “trashy” that she doesn’t even feel like going anymore. She’s now urging him to sell possessions, and throwing said possessions, to fund a better wedding. Then, she’s ripping on her bridesmaids’ dresses — they didn’t go out and buy new ones as instructed — as they won’t look as good as her little dog. Quite cunty, but understandably so. The dresses they sport ARE ugly. Then again, if someone who works on Bridezillas plans a wedding, a little bit of pre-planning is expected.

LOVE the sister firing back at her too, that being a maid of honor really isn’t the biggest dream of a lifetime. It inspires Danielle to “fire” her as MoH and tells her not to bother coming to L.A. for the wedding. [Insert Sad Trombone soundbite]

Flash-forward to wedding day: A “fustrated” (sic) Danielle is bitching about carnations and purple decorations being there, slugging champagne from the bottle, shotgunning canned beer and throwing her dog onto what she deems an ugly cake which is a birthday cake that Nate is recasting as a wedding cake. 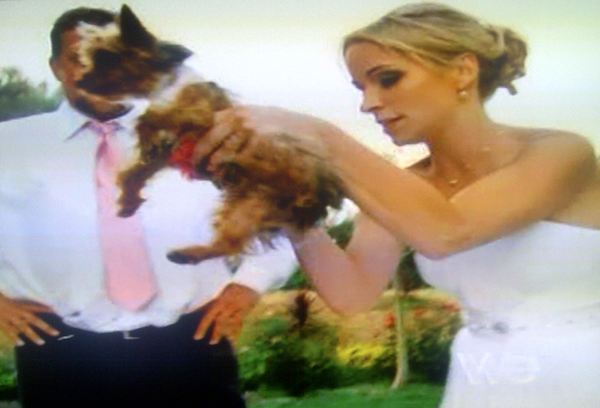 Anyway, I would not be the least bit surprised if they’re already divorced as this really felt as if a cry for attention from someone who sees a lot of weddings in her line of work. A gimmick that could shame a bloodline.

Bridezilla Natalie is back. So is her fiance who claims to be a professional football player but has no legitimate proof of that claim other than entering the NFL as an undrafted free agent, apparently.

Anyway, she calls a lawyer over the day before the wedding to talk about pre-nups. This shocks the fiance, Jacob. This shocks the conscience, too, as Natalie is nowhere near the star that she thinks she is as she breaks down the concept of the wedding as a “business move.” Side note: She looks really bloated when she says her friend is a “super bitch” for thinking love is more important than money.

From there, she bitches about being asked to take out an insurance policy on the wedding dresses she’s getting on loan.

“They should trust me. I’m a Bridezilla. I’m a Bad Girl. But that doesn’t mean I’m going to ruin your dresses,” she says. “Until you piss me off.”

Doesn’t matter anyway. The dresses are size fours and Natalie most certainly is not.

“Whoa, got a few pounds on there home girl,” points out her mom, accurately.

This is just an endless loop of an annoying, self-entitled dirtbag carrying on about how awesome she is (but isn’t). Natalie Nunn is a case study in how vapidity and celebration of hollow, empty “fame” will be the moral downfall of a nation.

“This is crazy, that I have to foot my own bill,” it says. “I’m Natalie Nunn. Does Kim Kardashian have to pay for anything? Of course not. I should not have to pay for my bill.”

Wake the fuck up, America.

We’re better than this.

← Bob Woodruff Was On The Daily Show Talking About His TBI-Inspired Cause
After Hurricane Sandy, I Really Hate This 2006 City Paper Cover That I Dreamed Up →