This may well be the pinnacle of Philadelphia trolling. Either that, or the city’s biggest jitbag made himself known yesterday.

Traipsing on into the comments section of what may be the city’s last bastion of white intellectualism, PhillyMag.commenter “phlhui” made his thoughts known in regards to a Temple student getting her face smashed with a brick by a pack of teens in North Philly the other day.

You can see said discussion below, but I’ll summarize it here: Stop being pussies, white people; it’s unbecoming.

Obviously, it drew a reaction … 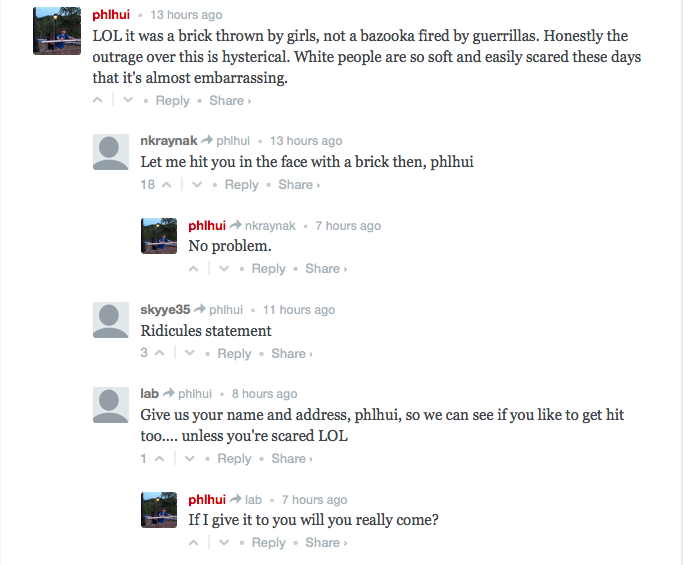 Couple thoughts on this.

1) Could’ve been a trolly response to a previous comment about how the school should “re-think their ban on student carry permits on campus.”

2) Could’ve been someone wading into the belly of the white whale to taunt crackas for being soft (though with a crackery photo on phlhui’s profile, not sure if that’s the case).

3) Could’ve been a case of tough-guy-behind-keyboard.

4) Could’ve been someone who saw a slew of racist comments (presumably) getting deleted so why the not fling some spaghetti up against the wall since it’s just going to get cleaned up by the cybermaid.

5) Could be that someone out there thinks a 19-year-old woman who got some teeth “dislocated and she suffered multiple other facial injuries” is a whiny little girl who needs to toughen up.

Whatever it was, it was interesting to see the phillydotcommenter dynamic flipped around and, a la Bizarro Day on Seinfeld, redirected onto a differently hued target.

But if it was No. 5, here’s hoping the thread continues with addresses and identities shared. That’s not to encourage someone getting attacked. Rather, it’d be refreshing to see at least one anonymous commenter prove that they’re not so much of a pussy that they have to hide behind a faux name when making absurd comments online.