Louden, Bride Hickey and I drove down to Fed Ex Field in Landover, Md. for Saturday’s international-soccer friendly between Argentina and El Salvador.

Obviously, I wasn’t going to pass on the opportunity to see Soccer God Lionel Messi with my (own) eyes.

Obviously, it was a disappointment that he did not play (though I would have been markedly more upset if he jeopardized Barca’s chance at a treble because of an injury in a meaningless match).

But being bummed about not seeing Messi play was far outweighed by the realization that Fed Ex Field offered us the worst sporting-arena experience in my 41 years of life. Here’s why:

1) A massive traffic backup bottle-necked into a two-lane turn-off onto the road leading to the parking lots. It took about a half-hour to move a half-mile.

2) Once we had the right to pay $40 to attempt to find room in already-full parking lots, the attendant shrugged when I asked where I should go park.

3) The best parking spot we could find was a patch of mud offering solace amid broken glass. (Counterphoto: Fun crowd…)

4) The Fed Ex Field lower-level entrance wasn’t run in a more efficient fashion. One employee took it on his own to push a barricade aside and start a “women and children” line so women and children wouldn’t die in a crowd crush.

5) The building was packed with folks from/with ties to El Salvador. The Fed Ex Field staff played the wrong national anthem, really setting the proper tone for the event.

6) The tickets said the match would start at 4 p.m. It didn’t start until around 4:30 p.m. That half hour featured obnoxiously loud pop songs blaring from the speakers not too far from our heads.

7) Pro: The sight line from the “obstructed view” seats was not obstructed as would have warranted the reduced price … 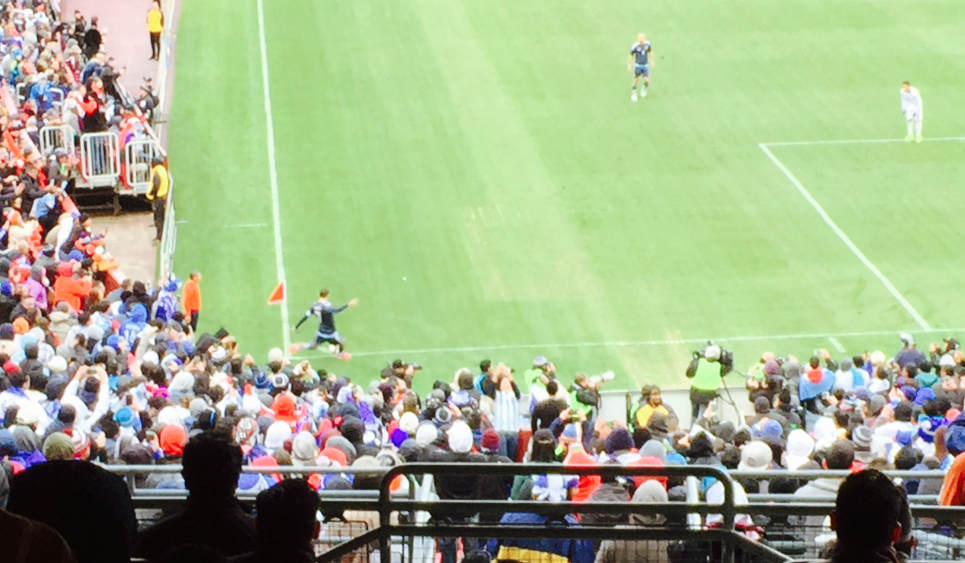 Con: but Fed Ex Field could have warned that it was in a wind tunnel, which my left me needing to buy an Argentina scarf in a futile attempt to keep our four-year-old son comfortable.

8) The paucity of staff on hand for the event left people who paid bookoo dollars to sit near the Argentina bench having to shoo non-section-ticket holders out of their three-digit view. The paucity of staff also meant that people were standing in aisles and on stairwells wherever they damn well pleased.

9) I saw a security guard barely avert brawling with drunk fans in a bathroom featuring piss-covered floors. I also saw a police officer (or a guy in a police-officer costume, more likely) cowering in a corner and not bothering to interfere with matters of crowd confusion.

11) Because of cold and fear of getting caught up in an eight-hour hellscape exit, we left a few minutes early and missed this magisterial Federico Mancuello golazo that would have been directly in front of us.

11a) Thankfully, I did get to see this one up close before we bailed, though. #silverlinings